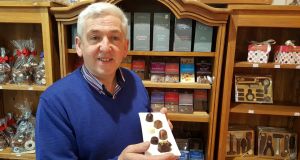 Jim Healy at The Chocolate Garden of Ireland’s premises in Rath, on the Wicklow/Carlow border

Jim and Mary Healy, who started out making Belgian waffles 15 years ago, say that they were “bitten by the chocolate bug”. The couple now run The Chocolate Garden of Ireland and sell their artisan chocolate products into more than 100 stockists countrywide, as well as hosting in the region of 15,000 visitors a year at their chocolate making workshops.

Originally, the couple manufactured under the trade name Wicklow Fine Foods, but when they invested in chocolate making machinery to coat their biscuits, they began to place greater emphasis on chocolate and established the brand name The Chocolate Garden of Ireland.

“We were trying to increase the number of products we were doing and to have a bigger range,” says managing director Jim Healy. “Initially we got interested in chocolate as a coating but then realised that we had equipment that was being under-utilised, so we got bitten by the chocolate bug and now that makes up the majority of our business.”

Coming from farming and consultancy backgrounds respectively, neither Jim nor his wife Mary had any experience in the food industry, other than having, as Jim jokes, a “sweet tooth”.

The couple now employ 20 people full- and part-time and create a range of more than 100 different products which are sold at their retail site and cafe in Rath, Co Carlow (on the Wicklow/Carlow border geographically – hence the name), as well as to retailers such as Avoca, Kilkenny stores, Fresh supermarkets and Thomas’s of Foxrock.

Moving into chocolate was a sweet move for the couple. “We now make up to 100 types of chocolate bar, including sugar-free, dairy-free and gluten-free, in a wide variety of flavours. We’re almost at the point where we are going to reduce the variety and number of products we make,” says Healy.

While customers shop for chocolate all year round, the specialist nature of their products also means that a lot of their production is seasonally themed, with a focus on Valentine’s Day, Easter, Mother’s Day, Halloween and Christmas.

“At the moment, we are busy making chocolate Santas, snowmen, Christmas trees and Christmas lollipops,” says Healy. “We were also making a sample of an Easter egg this morning – if you don’t plan in advance you won’t be ready for the next season.”

Planning has been essential to the couple’s success over the past 15 years.

“Business changes and you’ve got to be prepared to change with it – everything from people’s expectations to people demanding newness after a certain period of time – you’ve got to keep moving. We watch carefully what’s happening in the market and regularly attend trade fairs.”

Aside from top-down innovation, customer demand also dictates trends, and Healy says there has been increased demand for sugar-free and gluten-free products over the past number of years, leading them to make their production line entirely gluten-free.

Increased visibility has come through the chocolate making workshop side of the business, which the couple developed in order to generate business in their countryside location.

“When we were originally located in a small unit in Baltinglass in Wicklow, we could see that people wanted to come in and buy products from us, but we didn’t have the space and, when we moved location, we decided that we had to become a place for people to come to, rather than relying on passing trade,” says Healy.

The first visitors were a Scouts group and the couple got terrific feedback from them. They converted a storage area into a workshop and cafe and drummed up business through word-of-mouth, social media and contacting local groups and schools. Including revenue made at their onsite shop and cafe, this aspect of the business now accounts for up to a quarter of turnover.

Developing the business outside Tullow is important to the couple and they employ quite a few of the area’s young people.

“ It’s great that we can employ people locally. There is constant work here and we have a constant stream of people looking for work,” says Healy.

The first shipment of The Chocolate Garden of Ireland product headed to a north American retailer recently. The couple say they want to grow the brand at their current location and to continue to innovate with their chocolate products.

“We are a family-run business and we are both heavily involved. We want to grow in order to sustain ourselves, and we are always moving forward, but we are happy to grow organically in this location and to keep it hands-on as the artisan producers that we are.”