Dubai could help Ireland in China

Ban on gambling makes it challenging for horseracing to thrive 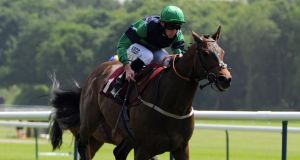 There are five or six individual Chinese thoroughbred owners involved in Ireland at the moment, who came over with a view to buying horses to bring back to China but decided to leave them in Ireland, training there, and they’ve had some success. Photograph: Anna Gowthorpe/PA Wire

The sport of kings generates considerable curiosity in China, but a ban on gambling makes it difficult for horseracing to really take off. Increasingly however there is interest in promoting Ireland as a place for rich Chinese to buy and stable and train thoroughbreds

“There are five or six individual Chinese thoroughbred owners involved in Ireland at the moment, who came over with a view to buying horses to bring back to China but decided to leave them in Ireland, training there, and they’ve had some success. That’s got to be the way forward for us all,” says Joe Osborne, managing director of Kildangan Stud, which is the Irish part of Sheikh Mohammed bin Rashid Al Maktoum’s global thoroughbred breeding operation Darley.

All forms of gambling are forbidden in the United Arab Emirates, so Dubai’s model is theoretically something that could work in China.

Osborne says the focus was to get Chinese buyers to buy a horse and leave it in Ireland because of the ongoing revenues through training and veterinary and jockey and other fees.

“The next step is somebody buys a stud in Ireland and starts breeding their horses there. We need a Chinese-owned horse to win something, then maybe a Chinese horse with a Chinese jockey on board, that’s what we need,” he says.

Osborne was in Beijing for the graduation ceremony for two of Darley’s three training programmes, the Dubai International Thoroughbred Internships and Darley Jockey Training programme.

The internships programme has been running for two years and is specifically for Chinese nationals aimed at giving college graduates a 10-month exposure to what Darley does. The interns get assigned to one of the five countries Darley operates in, including two weeks in Dubai. There are about 750 applicants for 25 or 30 places and, in the next intake, six are coming to Ireland

Graduate Wen Dianyun is focused more on the industry side than the horses themselves. “I’ve no background in horses and there is not much going on in horses in China but I’ll see what opportunities there are, maybe we can create some,” says Wen, who comes from Zhuhai in southern China.

“It gives an industrial perspective which is helpful for other industries too,” according to Li Huihui, another 2013-2014 programme intern, who comes from Henan province.

Osborne says the internships programme is not gearing the graduates for a career in the thoroughbred business because there isn’t a career path in thoroughbred here in China.

“This is about bringing them and showing them best business practice against a thoroughbred backdrop,” Osborne adds.

Darley’s other training programme is Flying Start, which has been running for 11 years, a two-year management programme managed from Ireland, which takes 12 graduates a year travelling to five countries.

There are 17 nationalities represented on it, including five Chinese.

Sheikh Mohammed’s organisation was behind a major race meeting in Chengdu in April, which put on an exhibition with his groups’ infrastructure and personnel and attracted a lot of interest.

“It showed that it’s not just a group of horses running around in a circle with riders on their backs, that there is a whole infrastructure and regulation and structure that is part of it,” Osborne says. “We are strictly thoroughbred. In China, they’re all horses.

Polo, show-jumping, if it’s an Olympic sport it moves it up the pecking order, there is a wide range of things. Here they associate horses with leisure.

“At the end of it, you pursue whatever career you have and then in that career you understand thoroughbreds and Sheikh Mohammed and Darley, it’s like a slow-burn approach. In the future you have advocates for the thoroughbred business when it comes along.

“It’s a great shop-window for Ireland too, not just from the thoroughbred side, because these guys come from such different backgrounds,” Osborne adds. They link in to whatever their areas of expertise are and find connections in Ireland as well. There’s a broader payback to this rather than just the thoroughbred side of things..

“In most countries where racing is successful, the jockeys are the stars. If you could end up with a situation where a Chinese jockey has success on the world stage, it could fast-track the whole thoroughbred thing. Think about what happened with basketball and the NBA with Yao Ming – a big profile star like that can bring great attention to the sport.”