Seamus O’Hara has a crafty plan for IFSC brewpub 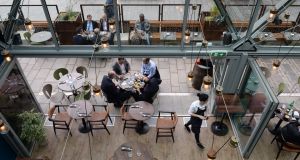 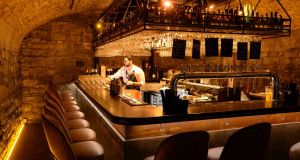 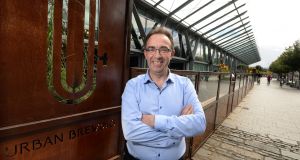 We’ve always had a great pub culture in Ireland – which we’ve exported around the world – but our beers have lagged behind. “Now there’s a bit of catch-up,” says Seamus O’Hara, co-founder of the Carlow Brewing Company. “We had this reputation for being a ‘beer culture’ and yet this was totally inconsistent with what you would get in a pub.”

That’s started to change over the past number of years with a huge increase in the number of microbreweries in Ireland – but there’s still a way to go. “Domestic craft beer only makes up for around 3 to 4 per cent of Irish beer consumption,” O’Hara says.

We’re sitting at a table in his impressive new venture, the Urban Brewing bar and brewery in Dublin’s IFSC, which opened this week. You can see up to the row of shiny tanks on a mezzanine level above the bar, where freshly-made beer can be supplied to the taps below and to a second bar in the vaults area.

“We want to make Urban Brewing a destination for unique in-house beers,” says O’Hara. Along with their own range of O’Hara’s, and plenty of other Irish beers, there will be collaborative brews, tastings and tours, while the brewery will act as a kind of pilot system for smaller, one-off batches. It’s a major step up in size and ambition from their Brewery Corner bar in Kilkenny.

“It’s a natural development for O’Hara’s,” he says. One of Ireland’s first craft breweries, the company celebrated its 21st birthday this year. O’Hara’s exports half of its produce, and its stout is its best-selling beer.

This year also marked a turning point for the brewery: Hijos de Rivera, a Spanish family business, best known for the Estrella Galicia beer brand, took a 32 per cent stake in the company. “If you’re going to build your business you have to have backing,” says O’Hara, adding that you need money and knowledge to move to the next stage. “They can help us execute our vision and there’s a bit of added value in that they also have knowledge of the beer world.”

Does this mean that O’Hara’s can’t be called an independent brewery anymore? “No. They’re a minority [stakeholders]. The people who controlled O’Hara’s before still control O’Hara’s.”

The issue of what defines a craft brewery is a tricky one. To qualify for the Government’s 50 per cent tax rebate for microbreweries, output has to be capped at 40,000 hectolitres (equivalent to about seven million pints).

This varies from country to country within Europe, the UK and the US. But scale isn’t the real issue, O’Hara believes. “For me craft is about the kind of beer you’re producing.”

It’s about creating diversity of beers and that being the core of your business, he says. Being independent is important, too, if you get taken over usually there’s less freedom to experiment.

Many of the bigger breweries have started producing their own versions of what some people call “crafty” beer. Guinness, for example, has their Open Gate brewery where they make some smaller, experimental beers.

Is that craft beer? “In my definition: no,” says O’Hara. “The vast majority of their business is high volume industrial beer, so what they’re doing on craft is not even material to their business. There has to be another motivation, which obviously is about competing with craft.”

But it’s tough to fight your corner as a smaller brewery. “If you’re a big player you’ve a lot of influence – whether you’re selling bread or beer or whatever, and whether it’s bar space or shelf space.”

But O’Hara is an optimist, and prefers to take the glass-half-full view of things. If the bigger brewers are getting more people interested in flavour and new styles, it’s probably helpful for the rest of the industry, he says. Maybe these new drinkers will get curious about other, smaller breweries.

Is there a danger that the craft beer market is becoming saturated? “It’s crowded alright,” he says. “But we still only make up 3 to 4 per cent of the market and if we could double that over the next few years it’s still not a massive chunk of market share.”

Breweries have different ambitions, too, some with a more local focus, others more export driven. “There’s lots of breweries dotted around the country – we’re not all in the same place, and we all have our local markets to build.”

He reckons the industry will evolve over the next few years – rather than any mass closures – with some companies quickly growing with others staying local and smaller, while there might be more consolidation.

Of concern, however, is the imbalance in the market between big and small, or craft versus industrial. There needs to be room in the middle too, he says. Increasing the 40,000 hectolitre limit would help, or by replacing it with some sort of sliding scale.

“For the sustainability of the sector you need to let some breweries move upwards,” he says. “If you’re too small [as an industry] you’re vulnerable.”

The so-called craft beer Bill, which was recently passed in the Dáil, is key to growth, he says. A huge boost to the industry, it allows for the sale of alcohol to visitors who have completed a tour of a brewery or distillery (previously it was illegal to sell to individuals under the wholesale amount or 18 litres).

Many small breweries in the US get the majority of their income through direct sales from consumers who call to the brewery or visit their taproom.

“The standards here are very high now,” he says. And while people often associate craft beer with higher alcohol and more intense bitterness and flavour, he sees more growth in sessionable craft beers. “A selling point for us abroad is the Irish drinking culture,” he says.

In contrast to some of the bigger and more intense beer associated with the US craft scene, O’Hara’s has plenty of easy-going offerings. “It’s this idea that you can have two or three, and then walk home.”

Earlier this year, the Carlow Brewery Company acquired Wicklow-based Craigies Cider, adding to its own craft cider brand, Falling Apple. O’Hara doesn’t have any plans to buy up some smaller Irish breweries – “though I wouldn’t rule it out either”. If it were to happen, it wouldn’t be “in a predatory way”, he says.

There’s a buzz about craft breweries at the moment and some see it as a business opportunity – but it’s a challenging industry, he says. His advice to new brewers setting up? “If you’re not really interested in beer or if that’s not your inspiration for being in it, maybe you shouldn’t be doing it.”

O’Hara is a big fan of festivals and beer events particularly because that’s where people often get to have their first taste of craft, he says. He’s one of the organisers behind next weekend’s huge gathering of brewers at the RDS festival. There’s some 40 breweries and 200 beers including a strong offering from the American Brewers’ Association.

Looking back on his 21 years in craft beer is there any particular moment or achievement that stands out for him? “I haven’t really thought about that,” he says, then pauses for a moment. “Walking into a bar in New York and having a pint of your own stout. That was pretty good.”