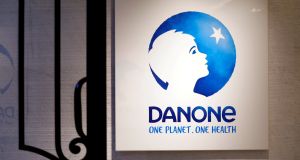 Danone this year set out plans to triple health food sales as it follows consumer shifts towards plant-based food in some of its major markets.

Shares in Danone fell on Friday morning by the widest margin since the financial crisis a decade ago after the French food group lowered its sales outlook for this year.

The group, which produces brands including Evian water and Activia yoghurt, is now targeting like-for-like sales growth of between 2.5 per cent to 3 per cent in 2019, lower than its previous guidance of around 3 per cent.

The company employs 400 people in the Republic.

“In an environment of growing geopolitical uncertainties since the beginning of the year, Danone remains vigilant,” the group said in its results statement on Friday.

Shares fell more than 6 per cent at the open, leaving them on track for their largest daily fall in more than a decade.

“Oh dear,” analysts at RBC Capital Markets said. “We admit that our confidence in the longer-term recovery story has been dented.”

Like-for-like sales grew 3 per cent to €6.4 billion in the third quarter, driven by a strong performance in markets outside Europe and North America.

Sales of baby formula in China, a key market for the group, rose 20 per cent thanks to an increased presence in brick and mortar stores outside of the biggest cities and growth in ecommerce.

Danone this year set out plans to triple health food sales as it follows consumer shifts towards plant-based food in some of its major markets. Its business, which includes plant-based products, recorded a 0.7 per cent rise in sales in the third quarter, including double-digit growth at dairy-free yoghurt and smoothie brand Alpro.

“Mindful of growing geopolitical uncertainties and softness in some markets, we continue to transform our business at pace so that it is well-positioned to respond to market needs,” said Danone chief executive Emmanuel Faber. – Copyright The Financial Times Limited 2019