Companies in row with Irish Distillers must provide €1m in security 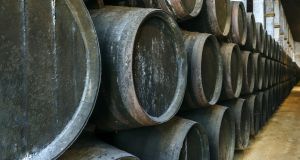 Two companies involved in bottling and distributing international spirits brands must provide €1 million security for legal costs in their action alleging Irish Distillers is abusing a dominant position in the Irish whiskey market by not supplying them with Irish whiskey.

The Court of Appeal rejected a pre-trial appeal by Protégé International Group (Cyprus) Ltd and Avalon International Management Inc, incorporated in Panama, over being required to pay €1 million security for the costs of their High Court case against Irish Distillers Ltd.

In the court’s published judgment, Ms Justice Una Ní Raifeartaigh noted Irish whiskey must be distilled on the island of Ireland from a mash of cereals and matured in wooden casks in a warehouse on the island for at least three years.

Any undertaking wanting to bottle and sell it must either distil it themselves or get it from those undertakings which mature and distil it in Ireland.

IDL, she noted, is a subsidiary of Pernod Richard, a French company with a major worldwide presence in the spirit market, particularly the Irish whiskey section of that market with Jameson the leader of its brands.

The appellant companies wanted Irish whiskey for a premium Irish whiskey product bottled, branded, distributed and sold by them as “The Wild Geese” but claim IDL has refused over several years since 2002 to supply them with Irish whiskey.

They say Pernod had taken some 50 actions in 34 jurisdictions seeking to prevent or restrict Protégé’s Irish whiskey brand competing with the Irish whiskey market, particularly with Jameson. All those actions failed except one in the US where Protégé’s brand is now sold under the “Irish Wild Geese Soldiers and Heroes” trademark, they said.

IDL opposes the action and, in a pre-trial motion, had secured a High Court order for security for costs. Dismissing the appeal, Ms Justice Ní Raifeartaigh said IDL was entitled to an order for security for costs. She noted it had been accepted, for the purposes of the security application, that IDL had established a prima facie defence to the claim and the appellants would not be in a position to meet a costs order if IDL successfully defends the case. The appellants had pleaded there were special circumstances which should lead the court to decline a security order but had failed to show, on a prima facie basis, their alleged inability to meet IDL’s costs was attributable to alleged wrongdoing of IDL, she said.