Famous brand fishes for finance and comes up trumps 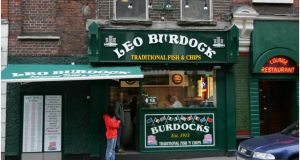 Fish and chip shop chain Leo Burdock has raised €50,000 in funding through the Irish peer-to-peer lending service LinkedFinance, the most successful loan completed via the platform.

“This facility will enable the business to grow its profitability as well as increase employment. The unbelievable support we’ve received means that this historic Dublin establishment will have a bigger, brighter future,” said Charlie McGrachan from Leo Burdock.

Dublin-based LinkedFinance, which has the backing of Enterprise Ireland and entrepreneurs such as Feargal Quinn, started operating in March 2012. The company said on Wednesday it has hit the €6million milestone in peer-to-peer lending pledges to SMEs.

“Companies like Leo Burdocks know that banks, while still a traditional source of business lending, cannot react with the speed of turnaround that companies need in the current marketplace. LinkedFinance bridges that gap and brings the added advantage of creating a community of active investors in Ireland’s recovery and the companies we have worked with can certainly attest to this,” said LinkedFinance’s chief executive Peter O’Mahony.

“As well as speed of loan turnaround, crowd lending provides complete transparency to both the lender and borrower combined with safety via a very rigorous check on the business plan of companies seeking to borrow. The unprecedented support for Leo Burdock’s loan application shows that crowd lending is becoming more popular, and will have a big role to play in economic growth and recovery for SMEs”, he added.

1 Ryanair and Eir the worst for customer service during Covid crisis
2 Fair deal? Family at odds with hospital and each other not so sure
3 ‘Essential’ retailers risk a firestorm if they exploit the closure of the ‘non-essential’
4 What to consider if older person or loved one needs care at home
5 Glenveagh attracts growing hedge-fund interest
6 PlanNet21 eyes further acquisitions after buying rival eCom
7 INM inspectors write to former directors in ‘inside information’ inquiry
8 Level 5 restrictions risk pushing economy into double-dip recession
9 Tinnitus group Neuromod raises €10.5m for expansion
10 Streaming services set for Christmas battle after drama-filled year
Real news has value SUBSCRIBE