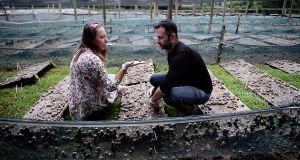 Carlow-based snail producer Eva Milka is actively seeking new premises to expand her business as demand for the product from locations including Dubai and Singapore intensifies.

Through her snail farming business – Gaelic Escargot – Ms Milka produces up to 10 tonnes of snails a year, all of which is sold unprocessed. However, she is now at maximum capacity based on the size of her premises.

Having established the first snail farm in Ireland in 2013, Ms Milka sells the majority of her produce to the French, Italian and Spanish markets. The company is also engaged in research and development at its Carlow site.

“We were also approached by Dubai and Singapore but they didn’t want fresh snails, they wanted something pre-cooked. So we’re nearly finished developing snails in jars with brine,” Ms Milka said.

While Italy consumes more snails than France, the French market is both the largest importer and exporter of snails as the country is active in selling value-added snail produce.

“When it comes to the highest margins, it’s always in the value-added product,” Ms Milka said, adding that an acre of snails could generate up to €200,000 a year if sold to the food-services sector. Sales to a wholesaler, meanwhile, can generate revenues of about €40,000 an acre.

The global snail market was worth about $154 million (€133 million) in 2016 at wholesale prices, according to a report issued in March of this year by Bord Bia. France imports $48 million worth of snails while other importers of value-added produce includes the US, Japan, Canada, Germany and Belgium.

The company, which initially received support from Carlow’s enterprise office, is also looking to additional opportunities including snail caviar, which can command a price of £76 (€85) per 50 gram jar. To put that in context, a snail can lay between 80 and 250 eggs at a time and there are about 300 eggs in a 50 gram jar, she said.

Ms Milka also flagged a report from Teagasc suggesting that about 78 per cent of the Republic’s 140,000 farms are not viable and suggested that snail farming is a way for some of them to diversify.

“The beauty of snail farming is that it doesn’t require much investment. An acre of land can produce just one cow but the same acre can produce about 10 tonnes of snails,” she said.