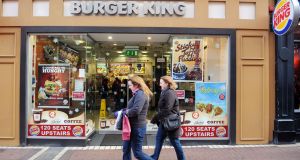 The burger chain is quickly ratcheting up its meat alternative offerings across the world. Two plant-based items, named the Rebel Whopper and the Rebel Chicken King, arrived in Sweden over the summer. Burger King is preparing to announce the details of a rollout across Europe, Mr Cil said in an interview Monday. He declined to provide further details.

Burger King said in June that it developed the Rebel menu items for the Swedish market with Vivera, a Dutch producer of meat substitute products. The chain also said in September that it’s working with Marfrig Global Foods and Archer-Daniels-Midland to produce a meatless Rebel Whopper for Brazil.

A surge in the popularity of plant-based meat has caused restaurant chains to seek out new menu items. McDonald’s is currently selling a “PLT” or plant-lettuce-and-tomato sandwich featuring Beyond Meat in Canada, and a Big Vegan in Germany, using a patty from Nestle. Carl’s Jr and TGI Friday’s both sell Beyond Meat in their American locations and other brands abroad. Globally, the alternative meat market is now estimated to be $14 billion, according to Barclays. – Bloomberg