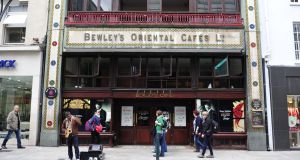 Bewley’s is planning a major refurbishment of its Grafton Street cafe, which will re-open on a phased basis in 2017. Photograph: Aidan Crawley

Irish coffee and tea group Bewley’s posted a 45 per cent increase in its revenues last year to €155 million but was dragged into the red by exceptional costs of €4.4 million relating to an “onerous lease” on its Grafton Street cafe.

Accounts for Bewley’s Ltd show that it made a loss in 2015 of just under €2 million, down from €3.9 million in the previous year. The losses are connected with its cafe on Grafton Street, which is currently closed for refurbishment.

In 2014, Bewley’s lost a long-running legal battle with its landlord, Johnny Ronan’s Ickendel Ltd, to have the near €1.5 million-a-year rent on its Bewley’s Oriental Cafe reduced to a market rate.

At a trading level, Bewley’s had a strong year, with its operating profit trebling to €3.15 million.

Bewley’s chief executive John Cahill told The Irish Times that the increased revenues reflected the positive effect of exchange rates on its operations in the US and the UK, and the acquisition of Peros Coffee in Britain.

He said like-for-like sales growth was around 15 per cent, and between 8 and 10 per cent in volume terms.

“We saw strong revenue and profit growth during the year although the benefits of that were reduced by an onerous lease provision in relation to our Grafton Street Cafe, where the rent payable exceeds a market reflective rent,” Mr Cahill said.

He said current trading was “generally positive” and Bewley’s would return to profit this year.

“Current trading is generally positive and we’re on course for further growth in revenues,” he said, adding that Brexit would have a “marginal” impact on its performance this year.

Bewley’s is planning a major refurbishment of its Grafton Street cafe, which will increase the seating capacity to 500 from 360 previously. It will re-open on a phased basis in 2017.