Greencore expands in US with $746m Peacock acquisition 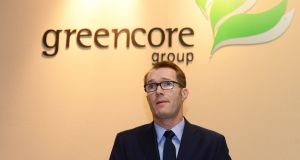 Patrick Coveney of Greencore: will have to integrate the businesses and achieve returns flagged to investors amid economic uncertainty in US and UK. Photograph: Cyril Byrne

When Patrick Coveney took over as chief executive of Irish food company Greencore in March 2008, not one cent of its revenue was generated in the United States.

The Cork chief executive set about changing that position almost immediately through strategic bolt-on acquisitions and organic growth and spoke about creating a $1 billion dollar business in the US.

Greencore is now on the cusp of blowing that target clean away after announcing a $746 million (€695 million) takeover of Illinois-based Peacock Foods, subject to various approvals that are expected by December 30th.

The deal is “transformational” for Greencore. It is by far its largest acquisition, dwarfing the £113 million (€132 million) it paid for British sandwich maker Uniq in 2011.

In revenue terms, the combined US business will be five times larger following the Peacock integration, which adds 2 million square feet of manufacturing facilities, 1,1,50 staff and a number of top tier customers, including KraftHeinz, Dole and Tyson.

The combined US business will account for 45 per cent of Greencore’s group revenues, up from 15 per cent previously.

“It’s difficult to put a revenue or size number on what you want to do with the business because a lot of the things that become available to you, you can’t necessarily control the timing of them,” he said.

“I hope we will have strong growth in both parts of the business. My best sense five years from now . . . it’s more likely that there’ll be greater revenues in the US.”

Negotiations with Peacock began in March, with an outline deal agreed in June. Then the UK voted to leave the European Union, with sterling collapsing in value against the dollar.

Mr Coveney said this made the Peacock deal about 20 per cent more expensive for Greencore but this was balanced out by a similar percentage increase in the earnings that will flow back to the group.

This is a huge transaction for Greencore and it is not without risk. At 10 times earnings before interest, tax, depreciation and amortisation (Ebitda), the price being paid is not cheap, but Coveney noted that it was lower than Greencore’s rating of between 13 and 14 times.

Coveney will have his work cut out integrating the businesses and achieving the synergies and returns flagged to investors amid economic uncertainty in both the US and the UK.

Many were sceptical about the Uniq deal five years ago but Coveney proved them wrong.

It’s a far cry from the days when the fluctuating fortunes of the now defunct Irish Sugar dominated Greencore’s agenda. The future is now all about frozen breakfast sandwiches and kids “lunchables”.