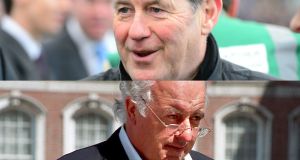 UK pub and restaurant company Mitchells & Butlers (M&B), which is 23 per cent-owned by horse racing tycoons JP McManus and John Magnier, saw its shares slump on Tuesday as it warned on the increased costs it would face as a result of Brexit and rising wages.

The London-listed company’s market value fell 3.4 per cent to £1.09 billion (€1.28bn) as the company reported its pre-tax profits for the year fell by more than 25 per cent to £94 million in the year to September 24th.

Much of the decline was due to an impairment charge due to a downward revision on the value of some properties.

Operating profit, stripping out the effects of property revaluations, fell 3 per cent to £318 million to miss consensus expectations by £4 million.

While M&B, where Mr McManus and Mr Magnier own their stake through an investment company called Elpida, said that like-for-like sales had picked up since it posted a 0.8 per cent sales decline in its last financial year, the company noted that it was facing a number of cost pressures in the current year.

The group said the outcome of the UK’s EU membership referendum in June may affect it in the medium to long term due to changes in consumer confidence, employment and immigration laws, as well as input costs.

Goodbody Stockbrokers analyst Gavin Kelleher said he was likely to downgrade his operating profit forecast for M&B for the current year by 2-3 per cent.

“We feel there is potential for value to be unlocked from the M&B business, but a degree of patience is required,” Mr Kelleher said.