Honey, here’s why I shrunk the Toblerone 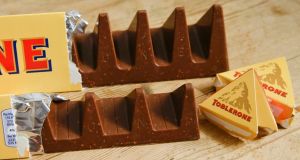 Honey, I’ve shrunk the chocolate. This month’s redesign of Toblerone bars is the latest example of the chocolate industry’s pursuit of “shrinkflation” – where the price of the product remains the same but the portion size gets smaller.

Mondelez, the US company behind Toblerone, has blamed higher commodity prices as well as increases in production costs for trimming the number of peaks in the chocolate bar which is manufactured in Switzerland.

The sharp rise in commodity costs “have been a challenge across the industry for some time,” says Mondelez. Indeed, Toblerone is not the only chocolate confectionery that has fallen victim to shrinkflation in the face of a rise in the price of the main ingredient, cocoa.

Over the past few years, Mars and Snickers bars have shrunk; a 1kg Quality Street tin has been cut to 820g and a six-pack of Cadbury’s Creme Eggs is now pack of five. Manufacturers are also turning to multipack bags of small chocolates, which appear enticingly bulky to the consumer but actually offer less chocolate, in an effort to push up revenue and trim expenses, according to Jack Skelly, analyst at Euromonitor, the consumer goods research group.

“Costs are going up and profit margins are being squeezed,” he says.

A weighted index of milk chocolate ingredients highlights the pressure chocolate makers face from commodity prices. A synthetic milk chocolate price – an amalgamation of the price of cocoa butter, cocoa powder, whey, sugar and whole milk powder – has jumped almost 40 per cent this year, according to commodities data firm Mintec.

The chocolate price had been creeping up since 2013 because of concern the El Niño weather phenomenon will hit cocoa production in West Africa. The big question this year, however, is why the chocolate price is rising and shrinkflation is happening when cocoa has actually been falling.

The answer lies in cocoa butter. It’s made from cocoa beans, and other ingredients, including sugar and whole milk powder, which have each risen more than 50 per cent, according to Mintec data, as supplies have dropped.

“Cocoa butter prices have been very high,” says Jonathan Parkman, co-head of agriculture at commodity brokers Marex Spectron. Unlike cocoa beans, there is no futures market for cocoa butter, which provides chocolate’s melt in the mouth feel. However, the price of the physical ingredient for consumption between October and Christmas has surged, making things “very, very painful” for chocolate makers, he notes.

Cocoa butter has risen almost 40 per cent this year despite the decline in the price of beans, which is at a three-year low, down 26 per cent this year. Profit-taking and forecasts of better weather in key producing countries have triggered a sell-off in cocoa beans, especially by hedge funds and other speculative investors.

The chocolate industry faced a scramble for cocoa butter this year after a supply shortfall in beans caused by bad weather was exacerbated by a rise in global demand through increased processing capacity. In Europe, a leading cocoa processor is understood to have faced temporary cash-flow issues, leading to a severe shortage in cocoa butter available for the region’s chocolate makers.

Over the past 10 days, there have been signs that the cocoa butter market is stabilising. Cocoa butter prices for the January-March quarter have come down by about 30 per cent thanks to the rise in availability of cocoa beans and the sharp fall in the futures price, say traders.

There is a “major change in the fundamentals” in the cocoa market, says Carlos Mera, analyst at Rabobank. “People are expecting a large deficit this year and the weather has been very good,” he says, adding that the bank is forecasting a surplus of 218,000 tonnes, the highest in six years.

Hedge funds and speculators have reacted to the bearish news, with the “net-long” position, or bullish bets, in cocoa traded in New York at the lowest since April 2013. In London, speculators switched to a negative position for the first time since February 2012, says Rabobank.

A fall in the cocoa bean and butter markets might spur demand, which has been depressed mainly due to the higher prices, say traders. Chocolate retail sales are set to fall about 2 per cent this year from 2014, according to Euromonitor.

However, lower prices will not automatically mean a reflation in chocolate bar sizes. Mr Skelly of Euromonitor notes that chocolate makers will introduce new product extensions of a brands and continue with miniaturisation – presenting them as healthy alternatives to larger products rather than helpful cost-cutting.

“You won’t see companies reversing the shrinkages they’ve made to their products,” he says.