Farmers may get to set beef prices following agreement 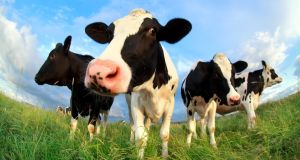 Talks to resolve the beef crisis are set to resume, while the establishment of a new body could mean that for the first time farmers rather than factories can set the price at which cattle are sold to meat plants.

Negotiations to resolve the crisis did not go ahead on Monday after Meat Industry Ireland suspended its involvement due to the ongoing blockades of factories by farmers unhappy with the price they are getting for animals at the factory gate.

However, following preliminary discussions with the parties at the Department of Agriculture’s campus on Kildare Street, Dublin on Wednesday, an agreement was reached that will see talks resume on either Friday or Monday.

The agreement will see a cessation of hostilities in the form of factories ceasing operations, while the protestors will lift their pickets.

Pat McCormack, president of the Irish Creamery Milk Suppliers Association, who was at the talks, said he hoped the agreement reached “will represent a first significant step forward towards a resolution”.

“The process – if delivered upon – should give the space necessary for parties to engage on the basis of good faith and deliver a solution to what is now a major problem coming on top of other very serious challenges already facing Irish farming and food production,” he added.

Earlier, Dermot O’Brien of the Beef Plan Movement said legislation introduced by the Government to allow a recognised beef producer organisation to negotiate on behalf of its members was a very positive development.

“There is a facility now for farmers to talk price with the meat processors and for the farmers of Ireland,” he said. “I would say this is a huge opportunity for them to be in charge of the produce they sell to meat processors.”

Mr O’Brien said the announcement should assist with talks to resolve the dispute, which has seen some 3,000 meat factory workers laid off following the continuation of pickets by some farmers at meat plants.

Minister for Agriculture Michael Creed said the move will allow a recognised producer organisation to negotiate on behalf of its members.

He said funding is available under the current rural development programme with up to €3,000 available to engage department-approved facilitators to assist with the application process for recognition of producer organisations.

Mr Creed said Glasson Beef Producers, trading as Irish Beef Producers, received formal notification of the acceptance of their application for recognition on the register of beef producer organisations.

Meanwhile, Mr O’Brien urged all Irish beef farmers to join Irish Beef Producers, saying that the more farmers who join, the stronger it will be when it comes to negotiating with beef processors on the issue of price.

The announcement by Mr Creed came after another frustrating day, with pickets continuing on several meat plants.

The Irish Congress of Trade Unions (Ictu) urged Meat Industry Ireland and employers’ body Ibec to urgently work to resolve the dispute given the risk that it was posing to the 3,000 workers already laid off and others still working in the sector.

Ictu general secretary Patricia King said: “Up to 3,000 workers have been laid off at meat processing plants and the situation is now impacting on the livelihoods of union members who are caught up in a dispute that is not of their making.”

1 NI house builder apologises to Harry and Meghan over adverts
2 Volvo warns of scaled back car line-up if UK splits from EU rules
3 Are there annual limits on inheritances or gifts to a child?
4 Who are Ireland’s 17 billionaires?
5 Opioid executive admits to ‘no morals’ ahead of prison term
6 Little strategic thinking in election manifestos of Fine Gael and Fianna Fáil
7 US threatens retaliation against EU over proposed carbon tax
8 NI businesses fear burden of post-Brexit red tape on goods transport
9 Ireland has EU’s most progressive tax system, study finds
10 CPL founders Anne Heraty and Paul Carroll in line for €1m dividend payout
Real news has value SUBSCRIBE