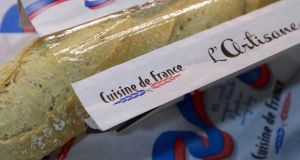 Shares in Aryzta, which owns the Cuisine de France brand in Ireland, are down 19 per cent over the past 12 months, notwithstanding a rally from late April. Photograph: Nick Bradshaw

Aryzta, the Swiss-Irish bakery group, said on Monday that it will scrap its Irish stock-market listing that dates back to 1988, underscoring how the group’s centre of gravity has moved in recent months to Zurich from Dublin as its future is being plotted.

The company, which stems from the 2008 merger between IAWS Plc and Switzerland’s Hiestand, said the decision reflected the relatively low level of trading in Aryzta shares on Euronext Dublin compared with the SIX Swiss exchange, a move to simplify regulatory requirements and reduce central costs.

Aryzta, which owns the Cuisine de France brand in Ireland and is a supplier internationally to the likes of Subway, McDonald’s and Lidl, traces its roots back to the 1897 foundation of the Irish Agriculture & Wholesale Society on Thomas Street in Dublin.

The centre of power at Aryzta moved late last year as it parted ways with a group of Irish directors, led by then chairman Gary McGann and chief executive Kevin Toland, both of whom had been brought on board between 2016 and 2017 to try to steady a then deeply-troubled company.

A boardroom coup orchestrated by a club of activist investors resulted in Swiss food industry veteran Urs Jordi taking over as chairman last September. A boardroom overhaul was completed in December.

Mr Jordi presided over a decision on December 18th to reject a €734 million takeover offer from US hedge fund Elliott Management. Elliott, led by billionaire Paul Singer, had been courted by the previous board.

The company is now focusing on the European and Asia Pacific markets and has put its businesses in both North America and Latin America up for sale. The company has said it aims to raise between €600 million and €800 million from disposals.

Swiss activist investment firm Veraison led last year’s investor revolt after spending up to 33 million Swiss francs (€30.5 million) building up a 9.81 per cent stake in the business during the spring. Veraison, led by financier Gregor Greber, confirmed earlier this month that it had almost entirely sold out of Aryzta, after doubling its money.

Shares in Aryzta are down 19 per cent over the past 12 months, notwithstanding a rally from late April.

Aryzta said it will be writing to Euronext Dublin to request the cancellation of the Irish listing of the group’s shares. It said owners of shares that have been traded in Dublin do not need to take any immediate action until they receive further notification.