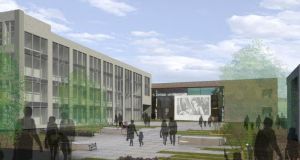 Plans for a €3.5 million “innovation hub” redevelopment of a section of the Smithwick’s St Francis Abbey Brewery site in Kilkenny were unanimously approved at a joint meeting of Kilkenny County and Borough Councils yesterday evening.

Kilkenny County and Borough Councils are proposing the transformation of the site’s brewhouse and maturation buildings as part of the project, with the local authorities having purchased 12 acres of the facility from Diageo for €2.1 million last year.

Kilkenny county and city manager, Joe Crockett told The Irish Times that the brewery site - parts of which are over 300 years old - occupies a “prime block of land”, with the €3.5 million set to help “transform” the “fine industrial buildings” into the new R&D centre.

Crockett said the facilities will also be open to “major Irish technology companies” and act as “a foreign direct investment location” to boot.

Mayor of Kilkenny, Martin Brett added that the new campus “will be a major boost for the economic development of Kilkenny and for the growth of the city centre”, while County Council chairman, Pat Dunphy said the brewery buildings and the 15 acres of city centre lands “available at and around the site would be a superb location for corporate and office use and for IDA and Enterprise Ireland-backed companies”.

Diageo is planning to create a €3 million visitor centre elsewhere on the Kilkenny brewery site, while Kilkenny County and Borough Councils will seek to use the Mayfair office block located there as “public office buildings” according to the proposal document Crockett presented to the council at a meeting yesterday evening.

Funding for the project will come from the sales of “surplus council properties” located on Kilkenny’s Dean Street and Wolfe Tone Street.

“Anchoring” the brewhouse plan, as Crockett put it, will be the relocation of the Telecoms Software and System Group (TSSG) and ArcLabs Research venture from St Kieran’s College on College Road to the refurbished facility.

Backed by Kilkenny local authorities as well as both the Waterford and Carlow institutes of technology, TSSG and ArcLabs already act as a hub for “next generation internet development”, working for companies in the finance, banking, agriculture and insurance sectors among others.

Initial designs for the brewery project were decided upon during a consultation process between Kilkenny County and Borough Councils and “11 leading creative thinkers” from the Royal Institute of the Architects of Ireland earlier this year.

Crockett, said the move is part of the Kilkenny local authorities overall economic development policy to “advance the development of third and fourth level education, research and development, and to expand Kilkenny as a centre for national and internationally traded services”.

Diageo confirmed in January 2012 that it would cease brewing Smithwick’s in Kilkenny as part of a move to centralise production as part of a €153 million expansion of the company’s St James’s Gate facility in Dublin.