The big idea behind small pieces of public art

New projects appearing around Dublin show that, when it comes to art, size isn’t everything 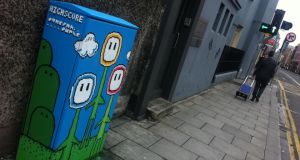 Where did all the small things go? Contemporary street lamps are plain, the little cast-iron shamrocks and curlicues adorning their older relations banished. Road signs are bland, utilitarian place-markers giving no sense of place; Luas stops are an exercise in exclusion of anything remotely fanciful or memorable.

The eradication of detail and ornament that ushered in Modernism began just over a hundred years ago in 1908. It’s starting point was a lecture, later published as part of a book, by Austrian architect Adolf Loos. In “Ornament and Crime”, he argued that ornamentation was degenerate, giving the example of tattoos: “There are prisons where 80 per cent of the inmates bear tattoos. Those who are tattooed but are not imprisoned are latent criminals or degenerate aristocrats. If a tattooed person dies at liberty, it is only that he died a few years before he committed a murder.” It was a remarkably influential essay.

At the same time, things have become bigger: buildings, roads, institutions, even art. Perhaps the two go hand in hand. Large roads call for large signs, where additional decoration could easily become florid. Huge gallery spaces engender similarly massive pieces of art, by the likes of Richard Serra and Anish Kapoor. The ambition of the Dublin Docklands project was to have given Dublin a sculpture by Antony Gormley, 46 metres high. As art gets bigger, the ornament often disappears.

Tiny difference
There’s a difference between small and minimalist. Minimalist artists make their work to a human scale, or larger, so that you can find an idea or sense of something reflected directly back, without the distractions of imagery or pattern. At the opposite end of things, the miniature has the potential to distil, to draw the viewer in to contemplate a world in which everything is intensified. Think about the different ways in which we, for example, stand back from a life-size portrait in the National Gallery, or lean into a tiny cameo.

Loos himself wasn’t above a highly ornamental style of writing: “We have out-grown ornament, we have struggled through to a state without ornament. Behold, the time is at hand, fulfilment awaits us. Soon the streets of the cities will glow like white walls! Like Zion, the Holy City, the capital of heaven. It is then that fulfilment will have come.”

Fortunately, what he hadn’t realised is that everything that happens is part of a cycle, and just as we are coming to terms with the flaws of the big (big government, big banking – you name it) so too are we finding again a space for the small. This is significant because the spaces we inhabit shape and inflect our ways of behaving, of thinking. It is easy amid the big to think that one’s own choices, decisions and actions have no bearing on society, that it is organisations and structures rather than people that make things happen. Amid the small, it’s clearer that we all have responsibilities.

In Japan, the brightly coloured ornate manhole covers ( manhoru ) are custom designed for individual towns and cities, by artists, designers and school children – small moments of unexpected colour and inspiration in an utterly unexpected setting (for more see the book Drainspotting , 2010, by Remo Camerota ). In Dublin, there are also developments making space for a return of the small.

Ruairí Ó Cuiv, public art manager with Dublin City Council, is looking at extending Rachel Joynt ’s wonderful People’s Island at D’Olier Street/Westmoreland Street. Installed in 1988, this is a perfect example of the small. Some pedestrians may miss the little brass claw, paw and footprints that scatter the traffic island, but those who do see them are enchanted.

Another small project in Dublin is Geraldine O’Reilly’s gently beautiful drawings of wild herbs, mint and rue on the utility boxes on Fade Street, which appeared in January this year. These were commissioned as part of the Grafton Street Quarter Improvement Project, and Ó Cuiv sees them as small gems, and an integral part of the overall treatment of the street.

Ideas welcome
A parallel but separate initiative is being developed by the Dublin City Architects office. Beta Projects (dubcitybeta.wordpress.com) was initially set up by Shane Waring as a 10% Innovation Time Project a year ago, and relaunched on its first anniversary on Wednesday. Run through open meetings, Facebook and Twitter, Beta Projects invites people to suggest small ideas of projects to change the space we live in.

The first visible results of this were 11 traffic-light boxes (those anonymous green boxes that lurk at street corners) repainted, with varying results, by artists and other members of the public.

Another idea in the (ahem) growth stage, has been developed from artist Anna Garforth ’s green graffiti. Garforth uses a mixture of yogurt and sugar to write texts in moss on walls in London. As the weather improves, keep an eye out on Little Mary Street to see things take shape.

The Beta Projects approach has been deliberately low key, an antithesis to grandiose thinking, and ideas or, as Waring puts it, “the problem you’re proposing to solve behind your idea”, are welcome through the website, Facebook and Twitter.

There is space for both big and small, the epic text and the poem, the utilitarian and the decorated – although these latter two no longer need to be mutually exclusive. “Those who measure everything by the past impede the cultural development of nations and of humanity itself,” wrote Loos. “Ornament is not merely produced by criminals, it commits a crime itself by damaging national economy and therefore its cultural development.” Thank goodness, one hundred years on, things are changing again.