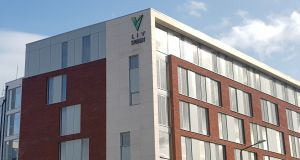 The LIV Student accommodation complex on Church Street in Dublin

Students face over 10% rent increase in Dublin complex: Tenants in a student complex in the capital are facing rent increases of more than 10 per cent due to what the management company is calling an “administrative incident”. Read more here.

Extinction Rebellion is about more than global warming: A man clutches a photo of his young children on the 6pm news. “I’m just a father of two children that’s very frightened of their future,” he says, as he begins weeping. Read more here.

Government restores €1.8m teacher Gaeltacht grants: The Government is to restore a grant scheme it abolished in 2011 to pay the fees of student teachers attending Irish-language courses in the Gaeltacht. Read more here.

The Irishman review: The sort of grown-up flick they don’t make any more. It’s taken a while, but Martin Scorsese’s latest sprawling gangster epic has finally made it to the screen. The great man’s take on the life of hoodlum Frank Sheeran was first mooted as long ago as 2007. Read more here.

Irish woman in New York: It’s dirtier and grittier than most people expect before arriving: Anna O’Carroll is a Lens-based visual artist who lives in New York. She went to the Institute of Art, Design and Technology in Dún Laoghaire (IADT) and has worked on low-budget indie features, high-budget TV shows, short films and various commercials. Read more here.

How to perform well under pressure: We hear a lot nowadays about pressure and stress, for example second level students and the CAO points race; the struggle to get on the housing ladder, achieving high performance in sports, etc. Read more here.

UCD says it will be represented at Cardinal Newman canonisation: UCD has announced it will send a representative to Rome next Sunday for the canonisation of its first rector Cardinal John Henry Newman. Read more here.