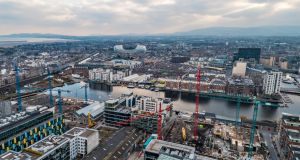 Dublin’s docklands area has become a hub for business and innovation.

Student accommodation crisis - share your story: Are you scrambling to find a place to live for the coming academic year? Are rental price hikes making it harder than ever to make ends meet? Share your experiences with us, for a special upcoming report on the student accommodation crisis. For more, read here or email us at studenthub@irishtimes.com

‘King of promises’- Tánaiste slated over student housing prices: Tánaiste Simon Coveney insisted the Government was meeting its targets on developing student accommodation on Thursday as he faced trenchant criticism in the Dáil that students could not afford the rates for purpose-built housing. Marie O’Halloran reports.

Thousands of new student beds which are coming onto the market are too expensive for Irish students and resemble deluxe boutique hotels, it has been claimed, writes Carl O’Brien.

‘I use dating apps but find them terrible. What am I doing wrong?’ Read more here.

Liam O Mochain is an original. For the last two decades, he has been making up his own rules as to how an independent film-maker should comport himself. Released in 1999, The Book That Wrote Itself, his debut feature, is notable for, among other things, listing George Clooney, Catherine Deneuve, Warren Beatty and many other megastars among its credits. (We’ll explain in a moment.) His second film, WC (2007), was set largely in the lavatory of a jazz bar. Donald Clarke reports.

Irish opera singer leading London’s Bring the Noise protest against Trump: ‘Every new story brought tears to my eyes. This was a few weekends ago, when the news of family separation in America was at its zenith. Those cries. That anguish. What can I do? was the question that gnawed at me’. Read more here.