Picture This: A band to watch out for!

An hour before to their debut gig in The Academy and with the excitement building up, Holly Kenny caught up with band ‘Picture This’ to discuss the success they have achieved to date. 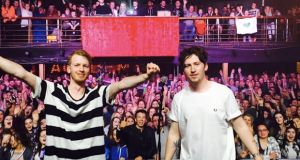 If you had told two young musicians from Athy that they would sell out at the Grand Social for their debut gig, they’d shake their heads and laugh. In the case of Ryan Hennessy (21) and Jimmy Rainsford (23), they surpassed their expectations and sold out in 30 minutes.

After relocating to a different venue, band ‘Picture This’ managed to sell out at The Academy in Dublin for their debut gig on April 3rd, making them the first band ever to achieve this.

“It hasn’t hit us yet. We were genuinely worried, we were like ‘Who’s going to come see us?’ We weren’t sure if we’d sell out,” says Jimmy Rainsford, drummer and backing vocalist for the band.

The band only formed in October last year but that doesn’t leave them shy of experience as Jimmy Rainsford was a drummer previously for singer Ryan Sheridan and Ryan Hennessy, lead vocals, was in a band called Bohemian.

“It’s given us experience to be aware of what to do, it’s good to have that experience when you’re starting a band. I have to say it’s been so natural so far, we’re just going with it.” The two boys, almost in sync look at each other, nod and shrug their shoulders.

The pair has known each other for a long time as they grew up together in the same town and went to the same school.

They decided to form a band when Ryan put up a video on Facebook of an original song called ‘Take My Hand’ which ended up being their debut single.

“I was playing it by a river and recorded it on an iPhone. Jimmy texted me later saying ‘you have to come out and record that song’.”

So far the guys have released four songs on their Facebook page since November last year; Saviour, Pretend, You & I and Take my Hand.

Both agree that ‘Take My Hand’ is their favourite. The reason why they took the name ‘Picture This’ is because they want their songs to ‘paint pictures’ of stories.

“The music we listen to never translates into what we write. I write lyrics based on moods rather than because a band wrote a song like that. I write from my own experience, I write stories,” says Ryan.

The songs are all recorded in Jimmy’s home studio. One word the boys use to describe their music is ‘uplifting’.

“I’ve said to Jimmy before, our songs will always fit perfectly in every romantic comedy. The story is; a lad falls in love with a girl, then they have a fight and he’s running back to get the girl – our songs would fit into that scene perfectly every time,” Ryan says as he smiles at Jimmy.

The band produces everything in Jimmy’s home studio from making their own music videos to creating their own merchandise and doing live videos on Facebook to communicate with their fans.

One aspect that has caught the public eye are their ‘Traffic Jams’ where they play music in the car.

“That is so much fun and that was not planned at all!” said Jimmy.

They record the songs on camera with Jimmy driving and singing backing vocals with Ryan playing the acoustic guitar and singing in the passenger seat.

After a lot of positive feedback, the boys branched a little further with it and invited other artists to join them in the back seat and sing.

A video of them singing ‘Crazy World’ by Aslan which featured Christie Dignam went viral around many different news outlets online.

Ryan and Jimmy’s faces both lit up when talking about the experience. “That was definitely our favourite one to do. He’s a living legend and that’s why our video went everywhere in online sites. His voice literally went through you in the car.”

There was a community feel to the gig as many trecked up to Dublin from their hometown in Athy.

When asked about the support, the boys had huge smiles on their faces as they spoke about their local community, friends and family. The gratitude could be seen clearly on their faces.

Jimmy with pride said: “It gives us such enthusiasm to do this properly because the town is behind us and all our friends are behind us. We are so fresh as a band, we’re just trying to find our feet in the industry. We’re writing songs all the time and even this gig tonight, we weren’t expecting any of this. We’re very dedicated to our music.”

To sum it all up, I asked them what was an aspect of the whole experience that they liked.

They both sat and thought about it for a moment, trying to summarise such a crazy and busy six months. “I like the feeling when we finish a song and we’re listening back and we’re like ‘Woah, this is so cool!”.

Jimmy said and turned to Ryan to see what he has to say since he’d sat in silence. There’s a spark in Ryan’s eyes. “What do I enjoy apart from the music? I like the excitement on Jimmy’s face when I say I wrote a new song,” he says, flashing a grin.

While only finding their feet the support they have received across the country shows that they are a band you should watch out for in the near future.

Will there be an album out soon? For the sake of us both, I hope so!