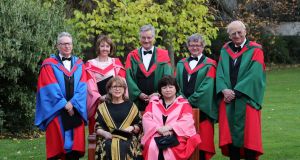 Former president of Ireland Prof Mary McAleese has been inaugurated as the new chancellor of Trinity College Dublin.

She succeeds another former president of Ireland, Mary Robinson, who was elected as first woman chancellor of TCD in 1998 and has held the post until now.

Prof McAleese’s functions will include chairing meetings of the university’s senate and overseeing ceremonial events such as commencement ceremonies.

At a ceremony at the university on Friday, Prof McAleese said her appointment was “a very proud moment” and paid tribute to the college as a “ jewel in the academic crown in the heart of the capital city.”

She was elected to her position as chancellor unopposed by members of the university senate.

Among the recipients were Irish Times columnist Fintan O’Toole; mental health campaigner Joan Freeman; former tánaiste Mary Harney; distinguished professor of psychology and neuroscience at University of California, Michael Gazzaniga; and champion of climate change and marine scientist at James Cook University, Queensland, Prof Terry Hughes. Prof McAleese graduated in law from Queen’s University Belfast and was as appointed Reid Professor of Criminal Law, Criminology and Penology at TCD in 1975. Aged just 24, she was the youngest person to hold the post.

While in that role she was, along with Senator David Norris, a founding member of the Campaign for Homosexual Law Reform, as well as its legal advisor.

In January 1988, she became the first Catholic and the first woman to be appointed director at the Institute of Professional Legal Studies at Queens, and in 1994 became the university’s first female pro-vice-chancellor

She was president of Ireland for two terms from 1997 to 2011. She has also worked as a barrister and journalist.