Inspired by last year’s #WakingTheFeminists movement, Eithne Dodd talks to Dramsoc’s auditor and secretary about their introduction of a 50-50 playwright gender quota. 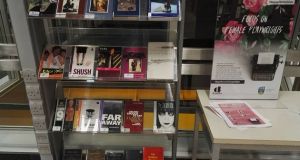 UCD Dramsoc and UCD Library have recently teamed up to create a spotlight display a selection of works written by female playwrights.

Taking inspiration from the #WakingtheFeminists movement, which took place in the Abbey Theatre last November as a response to the lack of female voices in Ireland’s national theatre, Seán Mac Dhonnagáin ran for auditor of Dramsoc with a manifesto to bring in a 50% gender quota for female playwrights.

“The idea for me came from the #WakingtheFeminists campaign and just seeing how underrepresented women are in certain aspects” says Mac Dhonnagáin.

“It’s half the population, he added. “To be focusing entirely on how one half of the population feels about whatever issues come up in theatre and plays is a bit ridiculous [to] just to leave out the other 50%.”

“Specifically here in Dramsoc; I think playwrights is where we fell down.” Mac Dhonnagáin added that “in a lot of other aspects, like our technical managers and our set builders, we have a lot of women involved and it is a fairly even ratio.”

Ailish Toal, Dramsoc’s current secretary, agreed that Dramsoc have a fairly even mix of men and women in all other aspects of the theatre: “It’s just that people aren’t picking women’s plays”.

To read the rest of this article please follow this link: http://on.irishtimes.com/up3wDAP