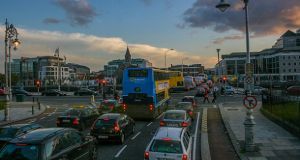 Commuting was once seen as an option where money could be saved. Photograph: iStockphoto/Getty

The accommodation crisis currently sweeping through Ireland’s third level students means that for some, commuting to college from their family home via car or public transport is the only viable option.

‘Commuter culture’ often has the effect of creating a 9-5 way of life in universities, meaning students are regularly forced to miss out on activities offered after lectures end.

However, with motor insurance and other costs associated with owning a car on a seemingly unstoppable rise, for student motorists, their social life taking a hit is the least of their worries.

According to an annual survey conducted by the AA, the average cost of running a car in Ireland has soared by €255.82 in the last year to €10,849.42. For the majority of students, this figure is financially unrealistic, if not impossible.

While fuel prices have decreased, the AA has said that the 38.6% increase to insurance premiums is negating any savings Irish drivers might have made. The rise comes on top of already dramatic increases in 2014 and 2015.

Commuting was once seen as an option where money could be saved, but with young drivers included among those most drastically affected by increases in insurance, it is becoming increasingly difficult for students to afford to commute by car, with public transport considered inadequate in many rural areas for students.

Students in their early twenties with older cars are being quoted premiums of €6,000 to €14,000, with some brokers refusing to insure them at any price in some instances. Shockingly, one-third of Irish motorists have reported their insurance rising by up to 50% in the last year.

The insurance industry has claimed the drastic increases in premiums have resulted from a similarly extortionate rise in payouts, although this defence was discredited by figures released to Michael McGrath, Fianna Fáil TD, which demonstrated that these payouts have in fact been decreasing since 2011.

A group known as Ireland Underground have been extremely vocal in their efforts to protect the interests of young motorists in Ireland. Founder Kian Griffin, speaking to the Irish Times, has demanded reductions in the outrageous premiums. “Students have enough to fork out for as it is and, on a limited income, these recent premium hikes are dangerously unaffordable.

Many are being forced off the road or forced to drive uninsured, unintentionally contributing to the increase.” Kian is confident of improvements in the next 12 months as the group, among others, put “mounting pressure” on the government.

A possible solution to the soaring cost of insurance could be lifting the ban on insurance companies in Europe from operating in Ireland, whose premiums currently run up to 400% cheaper than those available in Ireland. Currently, an office located in the country is necessary in order for a company to insure Irish motorists.