London Letter: David Cameron has been embarrassed by a book about his inner circle 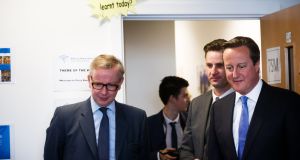 It was late, the garden was almost in darkness and the conversation was starting to peter out, but the evening was warm and still and nobody was making a move to go. A chat with the man on my left had fallen into a lull when I heard his son’s voice a few feet away talking about how discipline was enforced at Eton, which he left not long ago.

Corporal punishment and the institutionalised system of bullying known as fagging are long gone but the older boys still hold sway over the younger ones. He described the kind of fairly harmless forfeits they doled out, such as sending a boy to get the cheapest ticket from the farthest car park in the town.

“When they come back and hand it to you, you don’t even look at it. You just throw it in the bin,” he said.

It sounded like useful training for a lifetime of the small acts of cruelty and disdain that keep things on track within a slice of the English upper crust. I was reminded of it a few days later reading extracts in the Times from Sasha Swire’s Diary of an MP’s Wife.

Swire’s husband, Hugo, was a Conservative MP until last year, becoming a junior Northern Ireland minister during the premiership of his friend David Cameron. Her book is not published until next week but it has already created more excitement than any political diary since Alan Clark’s in the 1990s and early 2000s.

Much of the fascination lies in Swire’s candid delight at her place in the “chumocracy” around Cameron and George Osborne, moving from one boozy weekend to another in the various houses they occupied at public expense.

“The closeness of this circle is unprecedented,” she writes. “We all holiday together, stay in each other’s grace-and-favour homes, our children play together, we text each other, bypassing the civil servants. There are old rows, forgiven betrayals and historic rivalries. This is a very particular, narrow tribe of Britain and their hangers-on. It’s enough to repulse the ordinary man, already angered by the continuing hold of the British class system.”

Cameron admitted this week to feeling embarrassed by the revelations, which include a story about him telling Swire during a country walk that the scent she was wearing made him want to “give her one” in the bushes. But more interesting than the tittle-tattle is the subplot of class and betrayal surrounding Michael Gove and his wife, the journalist Sarah Vine.

Both Gove and Boris Johnson betrayed Cameron by backing Brexit in the 2016 referendum, but while Johnson was soon forgiven, Gove never was. Johnson’s opportunism protected him from exclusion from the charmed circle, whereas Gove’s ideological commitment to leaving the EU seems to have been what damned him.

Vine’s offence appears to have been a different one, as Swire illustrates in an account of a dinner party at the Camerons’ house.

“It was all very Notting Hill, but fun. Poor old Sarah Gove, who bends over backwards to please the Camerons, was lumbered with cooking all the food while Samantha was upstairs learning to cut patterns (she wants to set up a fashion business). She then had her hair done! Turning up at her own party feeling perfectly relaxed while Sarah is laden down with dishes of fish pie,” she writes.

Vine wrote this week that she had no recollection of ever making fish pie but she admits that she had been happy to help out a friend who had a busy life as the prime minister’s wife.

Part of the luck of the upper classes is that it is the layer just below them – which they most despise – who romanticise them most. Nancy Mitford’s U and non-U glossary of acceptable and unacceptable language was the first of many amusing hoaxes on the middle classes.

A few years ago, interior designer Nicky Haslam published an exquisite list of some of the things he found common, including such obvious items as Richard Branson, celebrity chefs, bottled water and glass fruit in a bowl. Also on his list were organic food, being ill, relaxing, going to the gym, minding about smoking and – best of all – loving your parents.

When Tennessee Williams visited England in 1948 he wrote to his friend James Laughlin with a harsh assessment of the country and some of his hosts.

“England is a great and indefinable horror like a sickness that has not been diagnosed but drains the life from you. The upper classes are hypocritical, cold and heartless,” he wrote.

“They entertain you lavishly for the weekend. On Monday you get a little note enquiring if you stole a book from them.”