Dolly Parton’s Christmas On The Square: One scene alone is worth the Netflix subscription 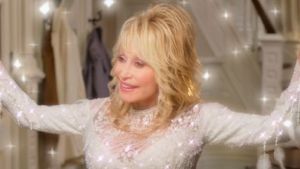 In common with the similarly titled Francis Ford Coppola’s Bram Stoker’s Dracula, Netflix’s Dolly Parton’s Christmas on the Square is a truthfully constructed trade description.  An old-fashioned Christmas special of a kind that hitherto only existed as a subplot for Bill Murray to fret over in Scrooged, it’s a bright, breezy showcase for veteran director and choreographer Debbie Allen and for Christine Baranski, who has plenty of fun as the Regina, the latest Ebeneezer ersatz.

A New Yorker (boo) returning to the small town where she grew up, Baranski has plans to evict the entire community on – wait for it – Christmas Eve! But what about lovable and wise moppet Violet, the daughter of the local barkeep? And what about Pastor Christian and his perma-smiling wife, Jenna? And what of Regina’s old flame (Treat Williams) and his tatty knicknacks shop?

Everybody and everything must go. The Cheatemall Corporation – yep, that’s what it is called in Maria S Schlatter’s warm, not-subtle script – is turning the entire town into a mall or something.

“Who would do that to people during the holidays?” wails one of the aghast townsfolk.

“Rich people who get tax breaks.”

Unless, of course, angel-in-training Felicity (Jeanine Mason) can earn her wings while also filling a Bob Crachett-sized hole. Boom. Why settle for being the latest incarnation of A Christmas Carol when you can be It’s a Wonderful Life too?

Felicity is aided and abetted in her Christmas miracle by senior angel Dolly Parton. Before you can say: ah ha, I knew it all along, Dolly appears, wholly unconvincingly, as a bag lady before magically transforming into a rhinestoned celestial. (This spectacle alone is worth paying the annual Netflix subscription for.)

Dolly not only has a direct line to the creator, she also wrote the music and lyrics for songs that are pleasing, if not as singalong as Jolene or her best loved karaoke standards.

It requires a phenomenal talent to write a festive ditty to the effect that fertility treatments are the greatest Christmas present of all. And it requires a very good sport indeed to poke fun at her own rhinestones.

A Jolly Dolly Christmas to all.