Public hospitals not ‘fit for purpose’ to handle surge in cases, Dáil committee to hear 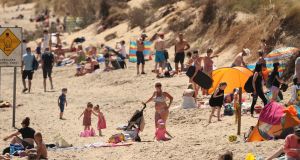 Many public hospitals are not “fit for purpose” in terms of providing safe distancing required to protect against the spread of Covid-19, the Health Service Executive has warned.

Even a “relatively modest spike” in the spread of the disease would have a very significant impact on critical care beds and the wider hospital system, it will on Tuesday tell a Dáil committee.

Separately, public health officials are expected to say today that a large-scale acceleration of the easing of restrictions is unlikely given that new cases of the virus are occurring daily.

“There were a lot of kites flown over the weekend, but I wouldn’t read a lot into them,” said a senior source, referring to newspaper reports that the roadmap towards the lifting of restrictions could be brought forward substantially.

The impact of the easing of phase one measures last month will only become clear later this week, but there is concern that the number of new cases, while small, has increased three days in a row.

One further death linked to Covid-19 was reported by the National Public Health Emergency Team (NPHET) on Sunday evening. An additional 77 confirmed cases in the State were reported.

NPHET will meet on Thursday to consider the impact of phase one and to decide whether to recommend the measures in phase two to go ahead. The Cabinet will decide on Friday whether the roadmap proceeds to phase two as planned on June 8th.

The delivery of healthcare will proceed in a higher-risk environment where an outbreak or surge could occur “at any time”, until a vaccine or cure for Covid-19 is developed, HSE national director of acute operations Liam Woods will say on Tuesday.

Due to underlying capacity issues, now amplified by the need to manage in a post Covid-19 environment, “the only immediate acute options that can provide an occupancy of 80 per cent is the private hospital system,” Mr Woods will tell the Oireachtas special committee on Covid-19.

The Government announced on Friday it would not be renewing the current deal with the country’s private hospitals after it runs out later this month, though it will seek to negotiate the use of private capacity in the event of a second wave of coronavirus.

Mr Woods will tell the committee the arrangement has delivered “very substantive benefits”, with 7,605 inpatients and 26,007 day cases seen. The private hospitals have also dealt with 24,407 outpatients and provided 35,073 diagnostic tests.

Occupancy levels have grown over time, reaching 51 per cent in late May, he will say.

As the lockdown is eased, the provision of services in endoscopy, cardiology, urology and orthopaedics are areas of immediate priority, he will say.

The waiting list for endoscopies climbed almost 50 per cent between the end of February and the end of April, while the number of people waiting for orthopaedic procedures increased by 41 per cent.

According to Mr Woods, the four national screening programmes, which have been suspended under clinical advice since March, can restart only when “certain safety conditions” are met.

Tbe private hospitals agreement represents “very poor value for money”, is not working and should be ended “without delay”, the Irish Hospital Consultants Association will tell the committee.

Meanwhile, Department of Education officials are due to meet school and parent representatives in the coming days to discuss plans to reopen schools in late August.

The outcome of the talks will feed into a detailed roadmap for how schools will be reopened, which is due to be published next week.