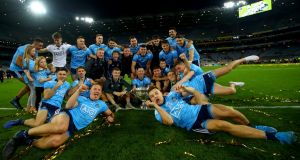 Fintan O’Toole/For the first time since 1171, Ireland is more powerful than Britain: It is foolish to read too much into body language, but what we saw in Dublin on Monday morning was startling. The Taoiseach was calm, clear, sure of his tone, which was neither aggressive nor ingratiating. Read more here.

Dublin take five and their deserved place in GAA history: The tumult on the pitch eventually subsided and by the time Dave Brubeck sounded a mellow finale, the fact sank in that this was history. It never feels like it at the time but in years ahead 14th September 2019 will appear as the date that something never before achieved in the GAA’s 135 years happened. Read more.

DUP’s sacred cows the biggest obstacle to Brexit deal: There are no unionist cows in Ireland. That seemed to be the logic of the comments made by Ian Paisley snr when he was first minister for Northern Ireland in 2007. Read more.

Elizabeth McGovern: ‘I didn’t realise how lucky I was’ - She starred with Sean Penn and Brad Pitt, and was directed by Sergio Leone and Milos Forman, but now she is donning Lady Grantham’s tiara again for the Downton Abbey film. Read more here.