A World turned upside down

The College View: The Netflix cult show picks up around a year after Will Byers’ escape from “Upside Down”, but behind the colourful arcade screens and Halloween decorations, there’s something strange lurking in the town of Hawkins. Fionnuala Walsh reports. 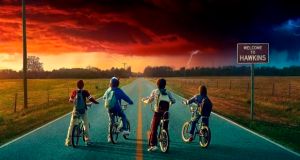 The mystery leads the 80’s heroes to face The Mind Flayer; the formidable new villain who has brings the story to a new level of sci-fi.

Stranger Things can be described as a relationship drama with monsters. While the CGI creatures, shadow worlds and psychic powers are all the more prominent this season, the underlying strength of the show is in the acting. The teenage cast, Noah Schnapp, Finn Wolfhard and Millie Bobby Brown in particular, raise the bar for child actors even higher than last year. Their performances alongside parental figures Winona Ryder and David Harbour stand out as particularly powerful and touching.

Schnapp plays Will Byers, finally home after vanishing to the “Upside Down” and being absent for most of the action in the first season. His performance as the troubled child being slowly possessed is some of the strongest acting of the season, with compulsive fits, blank stares and terrified panic all delivered with ease by the 13-year-old.

Finn Wolfhard, who plays lovelorn teen Mike, takes a back seat this season as he plays more of a sidekick to Will and mourns the disappearance of Eleven. However, Wolfhard masters every scene he appears in, especially in the final two episodes alongside David Harbour as Chief Hopper.

One of the strengths of the show’s creators the Duffer Brothers, is their ability to elevate traditional TV tropes of the harassed mother, nerdy kids and awkward teenagers into three dimensional characters with their own unique personalities and motivations.

To read the rest of this article please follow this link: thecollegeview.com