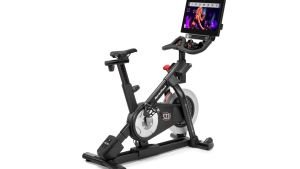 NordicTrack S22i Studio Cycle: this is more expensive than your usual exercise bike – although it must be pointed out that it offers more too

When I started this review, it was in the post-Christmas push of “Get fitter! Tone up! Do more!” that most of us go through. Having a NordicTrack bike in my home seemed like a great idea – I could do daily sessions, and before you know it I’d have smashed those fitness goals. Or something like that. And all this in the comfort of my own home, something I’m very big on because who wants to leave the house in winter?

Fast forward to March and I would cheerfully walk over hot coals to be able to go back to a gym. I haven’t actually been a member of one for about seven years, because I never went and it was my most expensive self-induced guilt trip, but after seven days of social distancing I am ready to see the error of my ways.

But still, the NordicTrack S22i bike is here, and gyms are out of the question, so we’ve become close friends, particularly in the past week or two. Like all relationships, we have our ups and downs, but more on that later.

First, the important things. This is not a Peloton bike, but it certainly looks similar. You have a giant screen that displays your trainer or workout, and also includes a fan, which is handy when you are feeling the heat on a particularly challenging workout. There are also some weights included, and a rest for the weights on the bike so you can have them close to hand for the studio-based workouts.

Speaking of the workouts, you have a couple of options. You can skip the trainer altogether and just pedal at your own speed and resistance level. You can take yourself off on a cycle around Lake Geneva or go mountain biking in the Rockies, sometimes following a trainer who barks instructions at you and gives a running commentary on what is going on around you. The third option are the studio-based workouts, which brings me right back to my short-lived attempt at spinning classes.

The studio classes are where you’ll need the weights. It feels like you are in a live class, with the trainer shouting instructions and encouragement. The iFit system takes over some of the control of your bike; it was somewhat of a surprise when it happened first. The trainer shouted to take the resistance up; I smirked and muttered “yeah right” and the bike did it anyway. That’s how it’s designed to work.

It’s the same for the incline and decline on the “real world” cycles. If you are mountain biking, the bike adjusts with the terrain, so even though you aren’t out in the open air, your legs will still feel the burn as you try to climb the different hills.

One of the less onerous workouts involved interval training, which seemed like a good idea. Some nice scenery, short burst of cycling fast and then some recovery time. Perfect.

I decided early on that I dislike the trainer. She’s perky and fit, and, I imagine, the kind of person who likes to say things like “pain is just weakness leaving your body” and “sweat is just fat crying”. Her shorts have “Love Pain” written across them, which indicates we have a fundamental difference of opinion on what we should love and what we should run screaming from.

All of this is viewed as if you are the second cyclist, dodging small children and watching out for cars as you would in real life. There are times when I really wanted to speed past her, just to put a halt to her encouragement.

As for the bike itself, well, you need a bit of space for it. It’s big. And heavy – my God, is it heavy. Choose the spot where you want to have it permanently very carefully, because unless you want to almost totally disassemble it, this one isn’t shifting to another floor easily. Trust me, we tried, and let’s just say someone’s back was nearly thrown out by the effort. That also means it’s very stable though, which is something you really need when you are flying down a mountainside – or a virtual one at least.

The NordicTrack S22i is easy to get started with, and if you suffer from gym-induced boredom, the option to take your workout out of the gym and into the “real world” should keep things interesting.

This is more expensive than your usual exercise bike – although it must be pointed out that it offers more too. The iFit subscription is included for the year, but after that you’ll have to fork out to keep it active. It’s still less than paying for the gym (and never going) though.

The bike is fully adjustable, with the height of the saddle and the handlebars easily moved.

An expensive way to cut down on the cabin fever, but better than your average exercise bike thanks to the iFit classes.