Strains identified in Dublin, Cork and Limerick linked to Birmingham, Boston and Copenhagen 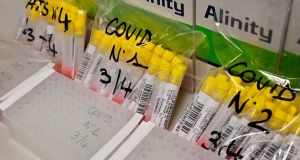 Since the Covid-19 virus strain was first identified in early 2020, scientists have been able to track its progress around the world.

The virus is very slowly evolving, but in making copies of itself in its human hosts, it can introduce occasional errors in its genome sequence to make a different sequence.

This means that strains are almost identical but, crucially, differ by the tiniest amount. These tiny differences can be used as a kind of tracker to show how the virus has spread.

Scientists around the world have analysed more than 2,500 publicly shared Covid-19 genomes and identified 100-150 mutations.

They have been able to identify that the outbreak in Washington state, which was one of the earliest places in the United States to record coronavirus cases, came from China in early January and a second strain came from Europe.

The results are available on a public access platform called nextstrain.org where scientists share results from laboratory samples from those who contracted Covid-19.

Having analysed the nextstrain.org data, Irish scientist Prof James McInerney, the head of the school of life sciences at the University of Nottingham, has confirmed there is no single origin of viral strains in Ireland. However, he identified three potentially significant routes of transmission.

Testing laboratories in Dublin, Cork and Limerick each identified separate strains of the virus which were connected respectively to laboratories in Birmingham, Boston and Copenhagen.

While the strain identified in Dublin is associated with Birmingham, this does not mean the virus genome originated in Birmingham. Rather, it originated in the area covered by the testing laboratories based in the city.

This could include Cheltenham which is 80km south of Birmingham though there were cases in Dublin before thousands of Irish racegoers returned from the annual festival in early March.

Prof McInerney stressed it is not possible to “say with any certainty” that Cheltenham might have been a reservoir for the virus. The strain present in both Dublin and Birmingham could have originated in the Irish capital and been introduced to the UK, he noted.

The strain identified with Cork is the same as that from Boston which is understandable given the strong Irish links with the city. Massachusetts is a hot spot in the US for the illness with more than 7,000 cases and 122 deaths to date.

The direction of travel is unknown here too, so it might be the case that the Boston strain of the virus originated in Cork.

Prof McInerney said the connection with Copenhagen is more puzzling. It could be that somebody from Copenhagen brought the illness to Ireland, somebody from Ireland picked it up in Copenhagen or that the disease was picked up in a third country.

“The bottom line is that Ireland is an open country. The links between this tiny sample of viruses is linked to international travel. This is normal in the early stages of an outbreak. You will see internal links later in the outbreak,” he said.

“We shouldn’t be surprised that there isn’t a single source for Ireland and the virus follows the traditional movement of our people.”

Many people have blamed the decision by the Government not to shut down flights from northern Italy during the early days of the pandemic as a factor in the spread of the illness in Ireland, but Prof McInerney said there has not been enough genome sequencing done yet to make a definitive judgment on whether or not that was a factor.

The first 13 confirmed cases of coronavirus in Ireland were all people who had returned from northern Italy or who had contact with such people.

Since the first outbreak, foreign travel has become less a significant factor as the virus has spread throughout the community by person-to-person transmission.

Of the 3,894 cases confirmed so far, the percentage of those who contracted the virus abroad has dropped to 18 per cent.

Kevin Mitchell, associate professor of genetics and neuroscience at Trinity College Dublin, said the lineages of the virus make it easier to track its mutations and will help to understand how it travels within countries as well as between countries.

“It’s very useful for understanding how the virus is spreading. At early stages, it has mostly been being introduced by travel. But now it has changed to community spread in many places. Knowing what phase it is in informs the public health measures that should be taken,” he said.