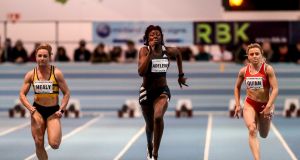 Rhasidat Adeleke (centre) in action during the women’s 60-metre final during the Athlone Grand Prix in February. Photograph: Bryan Keane/Inpho

Normally it would be right around now when we start deciding on our highlights of the sporting year, drawing up a shortlist for the best athletes, and looking back on some of our favourite moments.

Only this year, so little being normal, it’s looking like a very short shortlist, especially when looking back at the limited events and competitions that just a handful of Irish athletes opted to take up.

There were some opportunities, and with that lay some risks involved with travel, and also the ordeal that was required by athletes to just get to an event that would normally just be an hour or so flight away.

For those athletes that decided to push on and train at a high enough level to be ready to race there were some proper races. Still it wasn’t quite the same: many were glorified time trials, and the buzz and adrenalin that would normally boost an athlete in a packed stadium was missing. This results in a lot more energy required and taken from the athlete than you might expect in normal circumstances.

In some ways 2020 was a year of many dashed hopes, and in other ways it could be classified as the time out that athletes needed, particularly youth and junior athletes who in recent years have been regularly flying the flag for Ireland.

We’d become used to our most successful young athletes bringing medals home from every championship, and with that a level of expectation that every time they compete they will deliver a medal. Only with each passing year the bar is raised that little bit higher, and not just one more notch up the ladder as athletes at this age are also at a stage where they are growing physically and maturing at different levels.

In many cases they’re also finishing school and moving on to the next stage in their life, which can bring about challenges fitting in training, while sometimes living away from home, studying or working.

Of the European Youth Olympic team that delivered three gold and one silver medal in 2018, these girls in particular were looking forward to a step up to the world stage this summer, at the World Junior Championships, due to be held in Nairobi, Kenya before being postponed until next year.

Just like the European Cross Country in Dublin, postponed until 2021, the event is still there, but as a junior athlete most will move out of that age category without getting the chance to experience the world stage with athletes of the same age.

It can be devastating to have the rug pulled from under you like that, after setting out all your plans, to lead to that one moment. It’s been a similar pattern for so many young athletes across all sports this year. It does make you wonder what effect this will have on the development of these young athletes looking to go one step further each year, especially as this year just plateaued out, providing some maintenance maybe but not really any great progress, or at least none that is measurable beyond the training track.

They’ve only gone from being front page news in 2018, when the girls returned to Dublin airport with their medals, to hardly a mention in 2020. Only Lecky, who took gold in the high jump and Molly Scott, fourth in the 100m, plus multi-event athlete Kate O’Connor, competed at the National senior championships this year.

Healy is now based at UCD, where she continues to train under her coach Eoghan Marnell, and ran a few open races on the European circuit and maintained a top-10 world junior ranking; so she will have some benchmark to work with for 2021.

Similarly, Lecky was able to take in a few competitions while also remaining in Ireland, working in the family business. She also maintained close links with her coach, figuring out ways to train and stay motivated as best she can in the limited training facilities that so many athletes have had to work around. Patience Jumbo-Gula, also part of that underage sprint relay success, is also taking a sort of time out, now finished school and currently based in The Netherlands.

My daughter Sophie O’Sullivan hasn’t raced over 800m since early March, in Australia, but she has used the year to move on to the University of Washington, taking up a running scholarship, where she is working with the 800m girls on the team and a new coach Maurica Powell.

There have been no races in the US for Sophie yet, though they have been doing some time trials over 3,000m and a mile, which can give an idea of where you are at, only never quite the same boost you get when lining up for a race and the competitive juices are flowing.

Kate O’Connor, who won bronze in the heptathlon at the European Juniors in 2019, has also moved on to start college at Sheffield University, under coach Toni Minichiello, who guided Britain’s Jessica Ennis to Olympic gold in 2012.

Kate also won the javelin at the National champions this summer, so has been able to test out her training with some positive results heading into the winter and hopefully a more predictable season of competing in 2021.

Even though the Olympics will grab all the attention and focus in 2021, it will be interesting to see how next year plays out for these young athletes, especially as they’ve all tried to maintain some focus and training motivation despite the lack of competition.

There is also the European Under-23 Championships next summer, in Bergen, Norway, which may just be one of the highlights of the year ahead. This is a competition I have always felt is a bit of a halfway house for athletes, bridging the gap between junior and senior competition, and may prove be the most important competition for some Irish athletes in 2021.

Still many stepping stones have been missed out in 2020, which makes the challenge of stepping up again in 2021 that bit greater, especially for our young female athletes ultimately looking to step up to the World and Olympic stage.