For Judy Bobbett, powerboating is the perfect antidote to rugby 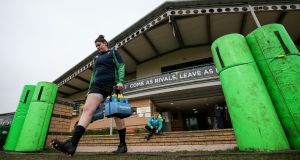 Judy Bobbett has plenty of other hobbies to keep her mind off rugby when she’s away from the action. Photo: Laszlo Geczo/Inpho

Judy Bobbett, who turned 20 in January, has already accumulated an impressive sporting CV, despite her tender years. A former Meath minor and senior goalkeeper in Ladies Gaelic football, she made her Ireland senior rugby debut as a teenager against Wales at the Belfield Bowl last November, going on to win further caps against Wales and England in the recent Women’s Six Nations Championship.

She also harbours a slightly untypical pastime: Powerboats, for which she has a licence. At weekends or when the opportunity allows, she heads for Greystones where her dad, Charles, has a Bayliner boat moored. Bobbett laughed: “Outside of the rugby I’m into power boating. I got my licence last year.

“It’s completely different and gets my mind away from the rugby. My mam, Aislinn, is really big into sailing. She hated the idea of me playing rugby, still struggles to watch me, so tried to steer me towards sailing. The ropes and ducking down isn’t my forté. My dad bought a Bayliner boat a few years ago, as a present to himself and I just got into that.

“There are less ropes and activity to it is fine to do it on my rest day. We go from Greystones to Bray Head; it’s a lovely pastime and we also go fishing. In Ireland it’s not as strict as other countries, you don’t have to have a licence for a powerboat but if you go to other countries like Spain and France, for you to drive a powerboat you must have one. That’s the reason I got the licence, so that I could rent boats when I go abroad.”

She completed a three day course in Dun Laoghaire incorporating the basics of driving, safety and other modules to get her licence. She is in the process of switching university courses from Economics, Politics and Law in Dublin City University to one that’s more ‘sports based’ at TU Dublin, starting in September to allow a little more freedom to concentrate on rugby.

The sport has captivated her from the days when as a child she accompanied her brothers Ollie and Rory to the local Ashbourne RFC, where she initially came under the tutelage of her dad. “I was about six years old, about three years younger than my brothers. One day the team was short and I was thrown onto the wing to make up the numbers. I played with them until I was 12.”

At that point she was no longer permitted to mix it with the boys but Ashbourne started a girls’ under-15 team with whom she played for three years, before numbers began to decline. Bobbett was also ensconced in the Meath Gaelic Football underage set-up, playing her club football with the Donaghmore Ashbourne club.

She continued: “At 15 there was no longer a team in Ashbourne but I knew I loved rugby. I was still playing Gaelic and wondered whether it would just be easier to follow the GAA path. Lorna Quinn from Westmanstown RFC contacted me and asked me to come down. It was only a 15 minute commute and that had about 20 or 30 girls in training from around north Dublin. I went there for two years and loved it.

“In GAA I played with Meath from the age of 12 all the way up to last year. I captained the minors to a Leinster final but we lost against Dublin.” She played minor and senior - where she made her championship debut at 17 - in the same year for Meath, reaching an All-Ireland intermediate final with the latter group. It made for a very busy weekend.

“I was playing with Leinster under-18s rugby team that year as well. We got to the interpro final on the Saturday against Connacht and I was to be in Croke Park on the Sunday in the All-Ireland intermediate final.” Unfortunately Bobbett lost both games - she was sub goalkeeper on the Sunday - but admitted “they were two great occasions.”

She joined Blackrock College and last November won her first senior cap for Ireland, starting in the secondrow in a narrow defeat to Wales. She had about 30 family members there from her mum and dad and other relations, to former teammates at Ashbourne, Westmanstown and Blackrock and about 10 of the Meath senior panel, all present to lend support and cheer her on.

There was a lovely sense of symmetry too to the occasions. Nine years earlier, a 10-year-old Bobbett, had been the mascot when Fiona Coghlan’s Ireland team played against Italy in their then home ground at Ashbourne. Now a teenage secondrow she realised a childhood dream, one fostered by a couple of former Ireland players.

“Definitely I would have been a ‘fan-girl’ with regard to two secondrows, Maz Reilly and Sophie Spence. Maz coached me at Leinster during the summer and when I went to the Leinster school of excellence in King’s Hospital as a young girl where Sophie was the coach. I was maybe 12 or 13 when she (Sophie) said to me that she wanted to see me in a green jersey. I knew from then that I wanted to be a secondrow and I wanted to play for Ireland.

“It (my debut) was a blur, I was extremely nervous in the week leading into the game; I can usually control my nerves but the fact that it was a home game and everyone would be there probably had an impact. The occasion overtook my emotions. I didn’t have the performance I wanted. I was probably too focused on the occasion.

“When I came into the Six Nations this year, it was still a special occasion but I had learned to focus on the game, not the occasion. I remember talking to the girls and about 60 per cent of them said they didn’t enjoy their first cap either. When you get past the first couple you start enjoying the rugby more than trying to focus on who is there.”

An ankle injury sustained in December meant that she not only missed Leinster’s special one-off game against Harlequins at Twickenham but also the opening fixture of the Six Nations against Scotland. She returned for the Welsh match where she gave a better representation of her talent in an Irish victory, and the subsequent defeat to England.

The coronavirus pandemic means that the Ireland’s team preparations for the World Cup qualifiers in September are currently in a state of flux. The team are training individually, competition fostered by via the Zoom app, with the coaching and strength and conditioning cadres assessing and doling out the work. Adam Griggs’ squad are due to play a number of warm-up tests in late summer.

Bobbett said: “We are hoping to go away on a tour but we don’t know where yet. There are two games scheduled. Another game was to be fixed at home. We still have the two Six Nations games to play as well and then possibly if we have time a November series to look forward to. If we qualify for the World Cup it will be a busy two years. Everyone is focusing on those qualifiers, we live, breathe and eat that, to qualify for next year’s World Cup.”

It may or may not come to pass. To retain some sanity during the lockdown period, she has embraced a new hobby. “I recently bought a ukulele. I hope to come out of isolation fitter and having learned how to play the ukulele.” On the basis of all she’s achieved so far it should be a mere bagatelle.