Why Manchester United should have stuck with David Moyes 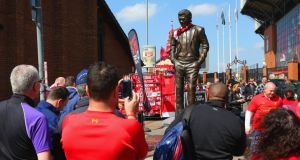 ‘What matters is the size of the wage bill.’ Fans take a picture of a statue for former Manchester United manager David Moyes. Photograph: Clive Brunskill/Getty Images

It hardly matters who succeeds David Moyes as manager of Manchester United. It hardly matters even to Manchester United supporters. What matters most to the success of clubs in the English Premier League is not really the manager or even the huge amount of money spent on transfer fees – the evidence is that this is largely wasted. What matters is the size of the wage bill.

This determined 92 per cent in the variation of the league positions of the Premiership clubs during the period 1991 to 2000, according to data published in Soccernomics by Simon Kuper and Stefan Szymanski. It doesn’t quite explain variations on a year-to- year basis (the correlation is only 70 per cent), because of the luck factor which evens out over time.

Brian Clough and his assistant Peter Taylor at Nottingham Forest from 1975 to 1993 were probably the best ever in playing the transfer market and one of their great coups was in buying Roy Keane from Cobh Ramblers for the equivalent of €57,000 in 1990 and selling him to Manchester United in 1992 for the equivalent of €4.5 million. One of their ruses, Soccernomics relates, was to buy players with personal problems – they usually came at bargain prices – then help them get over their personal problems and sell them on. They used to ask a player who they were thinking of engaging: “Let’s hear your vice before you sign. Is it women, booze, drugs or gambling?”

Based on data the authors and others have assembled, Soccernomics claims: “The vast bulk of managers appear to have almost no impact on their teams’ performance and do not last very long in the job. They seem to add so little value that it is tempting to think they could be replaced by their secretaries, or their chairmen, or stuffed teddy bears, without the club’s league position changing.” Jamie Carragher, the recently retired Liverpool defender, is quoted as saying: “If you assemble a squad of players with talent and the right attitude and character, you’ll win more football matches than you lose, no matter how inventive your training sessions, what systems you play, what team talks you give.”

Soccernomics says: “Perhaps the main service a manager can perform for his club is to avoid spending much money on transfers.”


Global superrich elite
But there is loads of money in football nowadays, largely because a new global superrich elite has invaded the arena, believing it can win glory by the scale of its wealth. Of the seven top teams in the Premier League at present, six are owned by billionaires, all living outside Britain.

Manchester United is owned by Florida tycoon Malcolm Glazer, who bought the club in 2005 for close to €1 billion, most of which he borrowed against the assets of Manchester United, which has burdened the club with interest payments of €72 million a year. As the Manchester United Supporters’ Club said at the time: “The fans will effectively be paying someone to borrow money to own their club.” Liverpool is owned by an American corporation, Fenway Sports.

Chelsea is own by Russian oligarch Roman Abramovich, the 50th richest person in the world, who has a fortune estimated at about €11 billion. Manchester City is owned by the Abu Dhabi United Group for Investment and Development Limited, of the United Arab Emirates, owned by Sheikh Mansour bin Zayed Al Nahyan, a member of the ruling family of Abu Dhabi. His personal wealth is estimated about €38 billion, within a family fortune estimated at about €380 billion. Arsenal is owned by Stan Kroenke, another American businessman, who has personal wealth estimated at more than €3 billion. Tottenham Hotspur is owned by ENIC Group, an investment company owned by an Englishman, Joe Lewis, a currency trader who lives as a tax exile in Bahamas. He made his “killing” betting with George Soros against the British pound crashing out of the European exchange rate mechanism in 1992.

Only Everton is controlled by someone living in England, someone interesting. This is Bill Kenwright, a film and West End theatre producer.

While at Everton David Moyes was one of the few football managers to achieve a higher rating for his club than the size of the wage bill suggested. Manchester United should have stuck with him.