What’s in the new roadmap for sports fans?

Malachy Clerkin picks through the details of the latest Government strictures 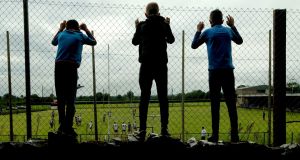 From today, 200 people can attend an outdoor sports event as long as it takes place in a stadium with a capacity of at least 5,000. In Dublin however the figure is just 100. Photograph: James Crombie/Inpho

Q So, what exactly is the story with this new roadmap? Can we go to a match now or what?
A Well, we can and we can’t. Some of us can, most of us can’t. More of us can than before, unless we live in Dublin, in which case, pretty much nobody can.

Q You’re going to have to explain that.
A Okay, here goes. From today, 200 people can attend an outdoor sports event as long as it takes place in a stadium with a capacity of at least 5,000.

Q Hang on – 200? Wasn’t it supposed to be 500?
A Well indeed. There was quite a bit of selective leaking over the weekend to that effect. Not for the first time, the advanced billing turned out to contain far more wishful thinking than the actual reality. It is 200 for now. It’s not much but it’s not nothing.

Q But that includes the teams, right?
A Wrong. Unlike back in July and early August, that 200 refers to crowds through the gates only. It is 200 people over and above the teams, officials, media, groundskeepers, stewards and whoever else has a reason to be there. So it’s an improvement in that regard at least.

Q Does the 500 apply at all?
A Not right now, no. It may happen in the medium term but only if and when the country moves to Level One of the roadmap. Given that we’re closer to Level Three in some areas – particularly in Dublin – that would seem to be a good bit off in the distance just now.

Q Okay, so 200. Good news for Shamrock Rovers, right? They’ll at least be able to give AC Milan a bit of a welcome.
A Well, no. First of all, Uefa have put all European matches behind closed doors for the time being, regardless of what each country’s local regulations say. And second of all, Tallaght Stadium is in Dublin and there are different rules for matches in the capital than in the other 25 counties.

Q Meaning?
A Meaning that only 100 people are going to be allowed into games in Dublin for the foreseeable future. And that’s still dependent on the stadium being capable of holding more than 5,000 people.

Q Ah here. So when Leinster play Saracens on Saturday?
A There’ll barely be enough tickets to cover the families of the players involved, yes. Even in the Aviva, the Government weren’t minded to make an exception. You might very well ask what’s the difference between a crowd of 100 people and one of 200 people in a stadium with a capacity of 51,700.

Q The thought did occur, yes.
A Your guess is as good as mine.

Q So this is all bad news?
A Ah no, not bad exactly. You will still have games that suddenly have people in the stands this weekend, GAA county finals and the like. It’s just not as good as the good news that we had been given to understand might be in the post.

Q Which was?
A A basic level of 500 allowed into games, with the potential for upwards of 5,000 in Croke Park and the Aviva and Semple Stadium and so on. It was always going to be a long shot that the Saracens game could have a couple of thousand at it but given the numbers flying around over the weekend, the impression went abroad that maybe, if Leinster win, the following weekend’s semi-final might have been different.

Q Not so much, huh?
A Not so much, no. “There has been no discussion around allowing the likes of 5,000 into games,” was the Taoiseach’s response when asked what had happened to the widely briefed figure of recent days. “That remains to be seen, in terms of larger sporting events towards the end of the year, there will be ongoing engagement between NPHET and the various sectors involved in terms of what might happen with larger events. But there have been no specific discussions around that.”

Q How has that gone down?
A The three major sporting bodies had been pretty pessimistic in the run-up to yesterday’s announcement so they were ready to be disappointed. They put out a joint statement soon after the press conference announcing they’d set up a working group to ensure “the safe return of spectators to stadia”.

Q Did they not have one of those already?
A Not officially. They have met the Minister for Sport and NPHET as a group over the past month but this is the first formal attempt to get bigger crowds back into bigger stadiums.

Q What are they aiming for?
A The winter. In October, November and December, there are major international games to be played in soccer and rugby, as well as the hurling and football championships. The three associations are haemorrhaging money so any way they can find to get four-figure crowds into stadiums, they will.

Q What are their chances?
A Who knows? Optimism seems foolish at this point. The case numbers are rising, especially in Dublin. If that translates into rising hospitalisations, ICU numbers and deaths, crowds in stadiums will be the least of anyone’s worries. Still, at least Leo Varadkar gave us a sports-related pep talk.

Q What did he say?
A “September is the time when Dublin traditionally shows the country what we’re made of.”

Q WTF?
A Look, just be happy there was no poetry.

1 Gordon D’Arcy: If South Africa moves up north, it could all go south
2 Charlesland Golf Club set to close permanently in December
3 South African franchises could join Pro16 by next March
4 Davy Fitzgerald has issues with GAA’s plans for League final
5 When Down’s 1960 All-Ireland victory brought down barriers
Real news has value SUBSCRIBE
Here is your handy guide to sport on television this week