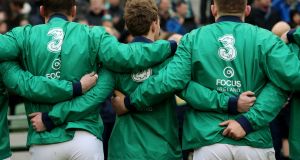 Only the most juvenile mind can equate Joe Schmidt’s capacity for organising professional athletes with keeping a political lid on this wet benighted rock of ours. Photograph: Billy Stickland/Inpho

In tribute to the late, great American comic George Carlin, and his famous list of people who ought to be killed, here’s a rather less bloodthirsty selection of sporting habits, traditions and customs that require elimination.

Like cod-sociological balls about embracing the spirit of the Irish rugby team’s recent Grand Slam success to make Ireland a better place for us all. Twickenham hadn’t emptied and trite claptrap encouraging us to heed the supposed life lessons of Conor Murray’s box-kicking started sprouting.

How every day, in every way, Conor gets better and better and, you know, if only such targeted mechanisms could be applied to traffic congestion on the M50 the country would move smoother than Gwyneth Paltrow’s colon.

Only the most juvenile mind can equate Joe Schmidt’s capacity for organising professional athletes with keeping a political lid on this wet benighted rock of ours.

But there’s no shortage of this condescension, something probably not un-coincidental to the growth of corporate “Leadership” courses where you too can talk to Joe and learn to unleash your inner-Johnny Sexton for 200 quid a pop.

And while we’re at rugby, can someone put a bullet in this ridiculous idea of it being the national sport all of a sudden.

Success always gets people a little loose with their affections. But it’s exclusivity which has always been at the heart of Irish rugby. It matters just as much who isn’t in the club as who’s in.

Hurling has a different sort of snobbishness and you’d be surprised how irrelevant some Gaelic football teams are in the weaker counties.

There’s only one game that provides everyone with a team: English Premier League soccer – Ireland’s one true national pastime.

Mind you that too has been afflicted by a devotion to all things statistical. Maybe it’s because access to athletes has shrunk to little more than exercises in product placement. Maybe it’s the American habit of reducing everything to figures and data.

So much coverage now is reduced to showers of statistical information supposedly illuminating our digital-orientated minds. In reality, everyone gets blinded with blizzards of bullshit screen filler. It’s bogus and boring. But who cares when it’s cheap.

As for complaining about restricted access, why not just eliminate this servile system of swapping product placement for the begrudged time of bored players by simply not indulging them.

Tell them and the sponsorship ponies they ride in on to go flog their crap some other way. The hard-sell has gone beyond parody anyway when it’s come to James Milner looking meaningfully at Alex Oxlade-Chamberlain balming his boobs in a shower.

Speaking of which, is there anything more absurd that someone in the public eye being on Twitter and complaining about public attention. Social media is nothing but attention seeking. You don’t get to flog yourself, or whatever you’re hired to plug, and then bitch about having no privacy.

There’s a place reserved in hell for those charged with assembling ludicrously grandiose build-up promo clips to even the most mundane events.

Presumably people make a living out of indulging their inner-Scorsese, segmenting inevitable slow-mo clips of clean-limbed athleticism to brooding glances to camera, all of it accompanied by unconsciously camp pyrotechnics and a brain-drilling soundtrack.

But has anyone ever heard of tone: when it looks like you’re billing Pearl Harbour then watching Clare and Waterford trot out to warm up is always going to be an anti-climax.

There are obvious GAA rituals that really require elimination. The urge to belt out the national anthem before even nondescript club games is one. Mouthing platitudes condemning off-the-ball cynicism while secretly glorying in the hard-man bit is another.

But one that’s developed currency recently is this portrayal of clubs as some bucolic model of communal goodness at odds with the grasping inter-county scene masterminded up there in Dublin.

This simplistic “four legs good – two legs bad” representation does no one any good. You have to have lived in a very snug incubator not to know the local can be just as vicious and cruelly mean-spirited as the cosmopolitan. In fact if no one’s allowed not play it can be a lot worse.

As for the very local species of the League of Ireland fan that thinks devotion to Sligo, Pats or “Ah-lone” lends them football authenticity, it might be no harm taking that superiority complex to the mountaintop to die. It really isn’t a good look.

Neither is racing promising as level a playing field as possible for punters but not batting an eyelid at how bad it looks to have top jockeys and trainers jumping into commercial bed with bookmakers.

Sure the practical outcome is usually little more than an exchange of platitudes about a nice horse and hoping for a good run. But don’t pretend it’s not a theoretical joke having the betting public look at these cosy relationships and not expect them to wonder how level the field actually is.

A bead should be drawn too on those slogans that are the product of hours of very expensive round-table brainstorms which ultimately come up with meaninglessness – “Who We Are Is How We Play.” Really?

Hurling in winter is a mystery. So mostly is the “them” to which excited winners indignantly refer to having shown in their moment of vindication. The continued employment of women as podium window dressing remains depressingly transparent though.

But it’s time to wind up this litany of complaint with a group of what George might have called social criminals – those who demand sports stars be role models for how the rest of us live our lives. Maybe worse are those arrogant enough to embrace the role.

“Just because I dunk a basketball doesn’t mean I should raise your kids,” the former basketball great, Charles Barkley, said 25 years ago.

Time hasn’t killed off that truth, or, sadly, the requirement to repeat it.