Schmidt makes four changes for Australia, Toland says be wary of the Wallabies, Dundalk on the brink of European exit and Danish duo dynamite in Melbourne 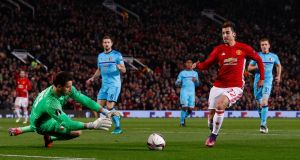 Joe Schmidt has made four changes - two forced, two unforced - to his Ireland side for tomorrow’s test against Australia at the Aviva Stadium.

With Johnny Sexton and Robbie Henshaw both ruled out Paddy Jackson starts at outhalf with Garry Ringrose outside him, while Iain Henderson and Keith Earls come in to replace Donnacha Ryan and Simon Zebo respectively.

CJ Stander and Rob Kearney continue to be monitored but seem to have won their fitness battles having been named in the starting XV, and they will face a Wallabies side loaded with big guns - Israel Folau and Michael Hooper among those Michael Cheika has welcomed back into the fold.

Liam Toland: Ireland must be wary

In his column today Liam Toland suggests Ireland need to be very wary of a dangerous Wallabies side, but believes they are beatable, he writes: “So how good are Australia? Well they are vulnerable. For instance the Australian defence is organised but nowhere near as violent or space-starving as the All Blacks last Saturday; neither is their counter-rucking.”

Dundalk on the brink of European exit

Dundalk’s hopes of reaching the Europa League knockout stages took a hammer blow last night as they were beaten 1-0 by AZ Alkmaar in Tallaght. The result means if AZ beat Zenit St Petersburg in their final group game the Lilywhites are out, regardless of their result away to Maccabi Tel-Aviv.

Elsewhere Manchester United showed flashes as they thrashed Feyenoord 4-0 at Old Trafford, with Henrikh Mkhitaryan impressing as he was given a rare start by Jose Mourinho.

Shane Lowry and Graeme McDowell enjoyed a better day in the World Cup of Golf but couldn’t keep pace with the dynamite Danish duo of Soren Kjeldsen and Thorbjorn Oleson. The Irish pair are tied for 16th after a 69 in the Friday fourballs but the Danes have a three stroke lead after shooting a 60.

And Down football legend Joe Lennon has died aged 81. He won three All-Ireland titles in the 1960s and became one of the game’s great academics.