Munster must realise legends don’t come free, Liverpool make an offer for Brazilian striker and what to watch out for 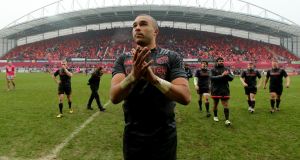 Leinster head coach Leo Cullen says he intends to make some changes to his team for Saturday final Champions Cup game against Wasps, “just to freshen things up”.

Among those set to sit out is young centre Garry Ringrose, who excelled against Bath but missed out on a place in Ireland’s Six Nations squad on Wednesday - he was given a couple of days off at the start of the week.

Cullen explained: “He took a couple of heavy bangs at the weekend and it’s important that we manage him in the correct manner,” before being asked about the 20-year-old centre’s omission from Joe Schmidt’s Ireland squad”.

Liam Toland says in his column this morning that for Munster to progress and again enjoy days such as those with “legends past” - they need to realise that those legends don’t come free. The province need to get bums on seats and then start investing in the coaching of young talent.

“How many millions of euros have slipped through the net (with unsold tickets)? And how many thousands have been invested in players such as Chisholm? Is he better than Dillane?”

Rory McIlroy will tee off for the second round of the Abu Dhabi Championship with Jordan Spieth and Rickie Fowler this morning, at 8.05am - full of confidence after yesterday’s “masterclass”.

In his first showing off the year McIlroy shot a round of 66, hailed by his rival Spieth who himself had an eventful round - receiving a slow-play warning that’ll cost him €2,500. That may have overshadowed McIlroy’s fine start, but the Northern Irishman was also upstaged by the clubhouse leader Bryson DeChambeau - the US Amateur champion hit a stunning opening 64.

Liverpool are in talks with Shaktar Donetsk over their Brazilian forward Alex Teixeira. The club have offered €32 million for the Shakhtar forward, with their chief executive, Ian Ayre, flying to Florida to try to clinch a deal.

Shakhtar, who are in Orlando preparing for the Florida Cup, value the 26-year-old at €50 million.

Meanwhile in the Australian Open Maria Sharapova and Roger Federer both made it through their third round encounters this morning.

Expect Ulster and Leinster teams to be announced today ahead of Saturday’s Champions Cup fixtures.

Follow the action at the Abu Dhabi HSBC Golf Championship, as Spieth and McIlroy go head to head for the first time this year.