Former Grandstand presenter has died at the age of 87 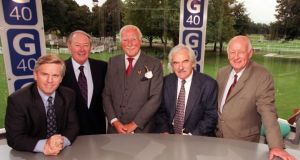 BBC Grandstand presenters Steve Ryder, David Coleman, Peter Dimmock, Des Lynam and Frank Bough during a celebration transmission from Ascot Race Course to marking the 40th Anniversary of the programme. David Coleman has died at the age of 87 the BBC have announced.

Sports broadcaster David Coleman has died at the age of 87, his family has confirmed.

The renowned athletics commentator worked for the BBC for almost 50 years, covering 11 summer Olympic Games, his final one in Sydney in 2000.

His family said in a statement: “We regret to announce the death of David Coleman OBE, after a short illness he died peacefully with his family at his bedside.”

Coleman joined the BBC in 1954, presented Grandstand and also hosted quiz show A Question Of Sport from 1979 to 1997.

He also became affectionately known for on-air gaffes, giving his name to the term Colemanballs.

Later that year he became the first broadcaster to receive an Olympic Order medal to recognise his contribution to the Olympic movement.

1 Boston-based Galway club hurler hit with proposed 48-week suspension
2 America at Large: Golfers guilty of legitimising Trump’s toxic regime
3 Gaël Fickou’s switch to wing a nod to what France expect from Ireland
4 ‘This is not a personality contest’ – Jack Nicklaus endorses Donald Trump
5 Solskjær’s stock is on the rise again after clever squad rotation
Real news has value SUBSCRIBE
Here is your handy guide to sport on television this week