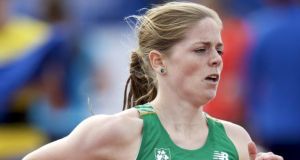 Síofra Cléirigh Büttner: this will be the third year she will represent Villanova at the prestigious NCAA championships. Photograph: Karen Delvoije/Inpho

Time somehow seems to gather pace as it passes, memories now set out not just in years but in decades.

I was thinking about this over the weekend when realising it’s now 30 years since I competed at the Irish Schools track and field championships, and maybe 10 years since last seeing the action live in the Tullamore Harriers stadium.

I have one picture taped into an old scrapbook of me running in a heavy rain shower over 800m, holding off Geraldine Nolan from Kilkenny, during the 1987 edition of the championships, which back then were held at the old athletics track at Belfield.

Everything about that day is still vivid, even if I just have that one picture to confirm the memory, no recording of the race to look back on and savour.

One positive mark of the progress of time is that I was able to watch the 2017 edition of the Irish Schools via a live stream, the laptop set up on the counter as I was preparing dinner last Saturday evening, chopping vegetables in between the various events.

It soon fired up old memories and also left me excited about the future, because if made for a great evening’s entertainment: some superb races all round, and for a change less about the times and more about the pure competition.

Records were falling, thick and fast, over 16 by the end, which certainly gives hope for the future, knowing our young athletes continue to raise the standard. Only it’s not unusual to see records broken, and as much as you would like to think this guarantees a bright future, there’s still a way to go before these athletes will stand out at senior level.

And when you see so many talented athletes, and the level of competition, you do wonder: where do all these athletes end up?

Because only a very small few of these Irish schools champions and record holders ever get to deliver results at the Olympic, World or European level.

It can be a giant step from schools athletics to the Irish senior team, not just qualifying to represent Ireland, but continuing to raise the bar and test the limits.

One of the biggest decisions for these young athletes is where to go next, when trying to best combine studying with training and competing. Do you stay at home? Go to another city, or county? Or possibly even to another country?

There is no guaranteed pathway to develop young athletic talent, especially when trying to combine it with college life. There are many more options now than, say 30 years ago, and also weighing up the balance and the importance of athletics in your future can have an impact on this decision.

One of the single most decorated Irish schools champions of all time is Síofra Cléirigh Büttner, who won seven titles on the track alone, and three years ago set out on the US scholarship route, to attend Villanova University. This weekend she runs at the NCAA Championships, staged at the famous Hayward Field in Eugene, Oregon: ranked fifth fastest in the event, she has yet to make an NCAA outdoor final, and will certainly fancy her chances of that.

Síofra looked very impressive qualifying from the Eastern Region, seemed to be holding something in reserve. Although athletes always have that look of ease and relaxation when there is no real challenge.

There has always been much debate about the US scholarship route, and whether it’s a wise move for athletes. I always see it as a safe option, providing the various stepping stones along the way to help build an athlete’s strength and durability, and also race practise.

It seems that race practice is a bit of a dying art form. Most athletes end up chasing qualifying times in set-up races, just to get to the start line of the next major championships.

Often, when these championships roll around, these same athletes just make up the numbers, and don’t even get out of the first round, because they don’t have the racing skills required in tactical races.

It’s a bit of a catch-22 situation that many athletes find themselves in: to be supported by their federation, qualification for a major championship is a requirement; yet they end up going there unprepared, because qualification becomes the greater goal than being able to compete on the international stage.

It should be a simple process, again brought home to me when watching the Irish Schools, where competing and winning the race was clearly the bigger priority.

We’ve all been ingrained to react negatively when a race is slow, or tactical, probably because we are busy these days we want to see things moving fast, can’t wait for the process to deliver the result.

I felt it myself while watching the senior men’s 5,000m from Tullamore. It was a pedestrian pace to begin with, and yes, more like jogging than running.

Even the entertaining commentary team of Cathal Dennehy and Ronan Duggan, who brought every race to life on the live stream, had plenty of time to settle in, assuring us that John Treacy could relax, as his 43-year-old record in the event was safe for another year. In fact the winning time was over 90 seconds slower than John covered the same 12.5 laps back in 1974.

John would have had time to change his shoes and pull on his tracksuit before Lisburn’s John Edgar just edged out Fearghal Curtin, from Midleton, in the final lap, but in many ways that made the race even ever more enthralling, as the lead changed four times over the final 400m, before Edgar took the win thanks to a blistering 26 second last 200m.

It’s a similar set-up in the US college system, where winning races and scoring points is the priority throughout the year. Times are required to qualify for the national championships, but each athlete gets four years to develop and grow as an athlete and get to the ‘big dance’, as they call the NCAA Championships.

This will be the third year that Síofra will represent Villanova at the NCAA championships, initially qualifying on a relay team indoors, then individually over 800m, and earlier this year qualifying for the final of the indoor mile.

So it will be her second attempt to qualify for the 800m final, and she looks to be in a stronger position, running more consistently and close to her best times, winning races along the way.

Still the 800m is one of the most difficult races to get through the qualifying rounds and into the final, and for Síofra it will mean taking another step up that ladder. There are no shortcuts when you decide to take the US scholarship route: it’s a bit like serving an apprenticeship, many challenges along the way but also time to make mistakes, learn and progress.

There is a sort of safety net in that in helps to build strength and character in a nurturing environment, where expectations are spread over four years. Those athletes able to take each step along the US scholarship route are most often the athletes you see challenging for medals in major championships, which they see as just another step up the ladder.

And that’s why even now, 30 years later, I still think it’s the best path for young Irish athletes to follow.