On Athletics: Is it time to rewrite the Irish marathon records? 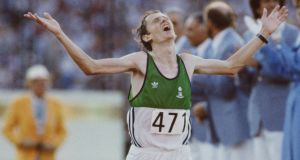 It’s tough sometimes being the son of an Olympic runner. Today will never be as good as the yesterdays, or so you’re told, the future always being compared to a thing of the past.

It’s tougher still when you end up reporting on the Olympics. The here and now is in constant showdown with the there and then, and when you’ve got innocence and nostalgia on your side there’s only going to be one winner.

So when Dave Hooper began work on his History of Irish Marathon Running – now two years in the making – the danger was that his father, Olympic runner Pat Hooper, would be so loyal and sentimental to the past that he would help make it all the envy of the present or, indeed, the future.

It’s a broad theme but mostly came down to the last two generations of Irish marathon runners: those who ruled the roads in the 1970s and 1980s and those who rule them now.

Comparing sporting generations like that can often be a pointless and futile exercise, and perfectly aware of that, Hooper didn’t deliberately set out to stake any claim on one over the other. No matter what his father told him.

This actually happens in a lot of sports. Every year, either by nature or default, the football and hurling championships begin against a backdrop of similar innocence and nostalgia, players and managers of the last generation pining for the good old days, when everyone, it seemed, was somehow made of harder stuff. Which, of course, is mostly laughable.

No modern footballer should be surrendering anything to the previous generation. Put Dublin’s Jack McCaffrey on the same football field as his father Noel, and see the gulf that exists. Likewise Monaghan’s Jack McCarron and his father Ray.

Not because the sons are necessarily more talented or harder working than their fathers, but because everything else that comes with the so-called modern game – the coaching, the science, the nutrition, the recovery – is infinitely more advanced now than it was then.

Cycling loves to compare generations, the apparently harder riders of the past always held up against the riders of the present, and the An Post Rás is no exception.

When Eoin Morton won Stage 2 into Charleville last year – the first full-time amateur stage winning in seven years – there were immediate comparisons with his father Peter, who in 1979 had won a stage of the same race into Mallow. Who is the better rider?

Put them on similar bikes in their prime – carbon frames and wheels – and it might be a race, but when Morton sets off on the 2017 Rás on Sunday looking for his second stage win he too knows he’s infinitely better equipped than his father ever was.

Marathon running may not benefit as much from advances in the science and equipment, although when Hooper was reporting from the Rio Olympics last summer he got another reminder of exactly how far Irish standards had regressed, particularly on the men’s front: Paul Pollock (32nd), Kevin Seaward (64th) and Mick Clohisey (103rd) were all creditable positions in their own right (Clohisey had been ill beforehand), but still a long way from say 1984, when John Treacy won the silver medal in Los Angeles in 2:09:56, and Jerry Kiernan finished ninth in 2:12:20.

Hooper’s father Pat ran the 1980 Olympic marathon in Moscow, along with Pat’s brother Dick Hooper, and they all feature in the History of Irish Marathon Running, which is broadcast later this month. So too do Treacy and Kiernan, along with Neil Cusack, and by the end it becomes quite clear today or tomorrow might never be as good as the yesterdays.

Cusack’s best of 2:13:39 (still ranked number 10) goes back to the Boston Marathon in 1974, when he became the first and still only Irish winner, and he recalls his first year on a US scholarship at East Tennessee where instead of coming home for Christmas he went down to Atlanta and ran the Peachtree Marathon, winning in 2:16:18, which was then a world record for a 19-year-old.

Pat Hooper talks about doing a 21-mile training run on a Friday, 24 miles on the Saturday, and 27 miles on the Sunday: “Not many runners could hack that,” he says. “And still can’t. And that’s one of the reasons why the standard has dropped. They’re not prepared to do the hard training.”

Treacy talks about doing a 29-mile run in the build-up to Los Angeles – hard – and Kiernan’s first thought after finishing ninth that day was that maybe he should have run better.

Dick Hooper reckons Irish athletes “went soft in their thinking and willingness to do the work”, for whatever reason (he partly blames the Celtic Tiger), yet doesn’t see any reason why things cannot improve again. It’s said in hope more than belief.

On Monday, the 2017 Dublin Marathon was launched with the promise of another record entry of 20,000 runners next October. More people are running than ever before, yet no one is coming close to the Irish marathon records, which are somehow made of harder stuff. Might it – and for reasons that have nothing to do with doping – be time to rewrite those records too?

The History of Irish Marathon Running airs on Near FM on May 30th at 6pm.