Afghanistan pull out of ODI series against Ireland

Clash with domestic T20 competition cited as reason for withdrawal 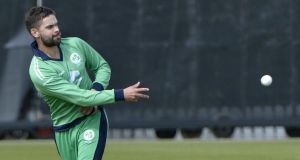 Ireland’s summer home international schedule has been left looking very bare after Afghanistan informed Cricket Ireland that they will not travel to Belfast for a three-match ODI series next month.

The Afghanistan Cricket Board cited a clash with preparations for their domestic franchise Twenty 20 event as the reason behind their withdrawal.

Ireland faced Afghanistan in all three formats of the game over the winter, losing a hard-fought ODI series 3-2 in India.

“Of course, our preference is to give as many opportunities as possible to our senior men to play our closest rivals on our home turf, so we are disappointed the matches won’t proceed in July,” said a Cricket Ireland spokesperson.

“We have enjoyed two very competitive recent ODI series against Afghanistan in Belfast and India. Hopefully we will continue to work with the ACB to see if there are further opportunities to reschedule the matches at a later date.”

Ireland’s only other scheduled home ODI is against the West Indies at Stormont on September 13th.

Meanwhile, the Hanley Energy Interprovincial Championship match between Northern Knights and Leinster Lightning finished in a draw at Stormont on Wednesday.

The Knights opened their second innings 55 runs adrift of Leinster and were in trouble on 166 for six before an unbeaten seven-wicket stand of 162 between Ireland internationals James Shannon (140 not out) and Graeme McCarter (62 not out) helped secure a draw.