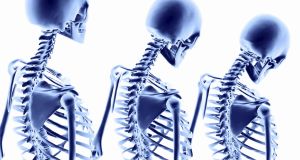 Teenage girls who train too hard and don’t get enough nutrients in their diet are at a greater risk of developing health problems. Photograph: Getty Images

We hear a lot these days about increasing levels of obesity in our schoolchildren and the need to get them exercising more and eating less.

It sounds like a logical solution – that more activity, less junk food and a healthy, balanced diet, would easily address the problem but obviously from the statistics there’s still a long way to go in getting this message across.

The only danger is that the problem of young children being too active, pushing their health to an excess, is often overlooked. Just because they’re on the opposite extreme doesn’t mean they’re not heading down a similarly unhealthy path of destruction.

This is mostly seen in young girls – particularly teenage girls as they pass through puberty. Natural body changes are expected to occur but sometimes they don’t, and this is where the problems begin. And male athletes aren’t immune either.

It’s an issue that’s often ignored, either because young girls are reluctant to speak up about it or because it’s not easily recognised. Young athletes can have a hard time realising that more is not always better, that sometimes patience is needed, and it’s not all about being the best at your age.

Last week in Athletics Weekly magazine, Bobby Clay, a young British distance runner, told her story, highlighting the fact others may not realise they’re heading down the same path and need to do something about it before it’s too late.

Still only 20, Clay was European Junior 1,500m champion in 2015 and at age 15 competed at the World Junior Cross Country Championships, but she’s never had a natural period, and has been diagnosed with osteoporosis.

Her problem started when she began training and competing with older athletes, and with that fell into their finicky habits with food. That also meant falling into the trap of expending a lot of energy training and racing, while being under-fuelled in her diet.

Too much exercise, being too healthy with eating habits, trying to compete with those around you, can very quickly become detrimental, but still it’s not always obvious until it is too late.

Any athlete will tell you that if they train hard, weigh less, they’ll run faster and win more races. In most cases this is true, but if things go off balance, then things can quickly take a turn for the worse and the internal damage to a growing female can take a long time to fix.

This is not just to fix the athlete but to walk around again as a fit and healthy young woman.

The root cause of the problem in young girls is lack of menstruation and as a result lack of female hormones, particularly oestrogen, that help with the growth and development of healthy bones.

The result is a diagnosis of osteoporosis and often a bone density that is so low it is more common in much older women, not growing teenagers. It is reversible but like most deficiencies, the repair time and effort is much more difficult than the time it took to get to that point.

It’s actually quite common for teenage athletes to become obsessed with competing, obsessed with improving themselves, so much so that everything that can help becomes an obsession.

It used to be known as the “female triad”, which seemed very medical and a frightening thing to talk about. The triad was made up of irregular menstrual cycles, energy deficiency and bone loss, often seen through a series of stress fracture injuries. And certainly not presented as something that a young athlete would like to discuss or be associated with.

One of the lucky ones

I’m sure there was a time when I went through this in my early competitive days, and I believe I was one of the lucky ones in coming through. When at college in Villanova, I had a series of stress fractures although there was never much discussion around the cause, beyond running too much too soon after time off, or else too much running on hard surfaces.

It can be a tricky time because we all know when training is restricted, it’s a lot harder to maintain low body weight. And trying to maintain fitness by aqua jogging in the swimming pool is just not the same as training on the track with the team.

Some young athletes can ride the storm and definitely get away with what could be so much worse. It’s just so much better to play it safe, rather than digging a hole and then trying to dig your way out again.

Rather than the female triad, the problem is now known as relative energy deficiency in sport – more commonly REDs. This also points out that this problem is not specific only to young women but also young male athletes.

I think the term REDs is a more understandable and comfortable way for young athletes to discuss the issue with their parents and coaches, and it is something that needs to be discussed more in order to protect children and allow them to continue in their sport at a level compatible with their growing bodies.

As growing athletes with very active lifestyles, it’s easy to expend a lot of energy in sport and not leave very much for normal daily requirements. The important nutrients too can sometimes be lost with too much running around the track or playing field.

I can remember on the way home after training with Ballymore/Cobh Athletic Club, joining in on a game of tennis on the street, eventually going home and completely forgetting that I hadn’t had my dinner. The adrenaline and buzz of sport, whether competitive or fun with your friends, means sitting down to dinner is not the priority.

I can see it now with my own daughters, always rushing around and never wanting to miss out. After training young athletes have to have a small meal or healthy snack at the very least, especially when they are rushing on to the next activity.

It’s an issue that is far more dangerous in children, as it causes problems with the natural growing phases, but it’s just as easily seen in adults, also burning the candle at both ends. No matter what level of sporting participation, it’s important to manage your daily eating habits to maximise the energy required to be able to operate competently in normal day-to-day activities after you’ve been out pounding the roads early in the morning or late in the evening.

If adults can tackle this issue, which can take over athletes of all ages and levels, then it will be easier to discuss and engage with their own children, or athletes they may coach or advise.

This is something that needs to be spoken about more openly and broadly. Clay sharing her painful story last week has helped get the conversation going in athletics circles.

Hopefully it will save others from similar grief and torture in trying to overcome the destruction that can quickly take over an athlete who once had great potential and only tried to skip a few steps along the way.

1 ‘A radical departure’: Who are CVC and what are their aims with rugby?
2 Ken Early: Why international football is fading into obscurity
3 Colin Kaepernick’s exile is too fresh for NFL to speak out on US protests
4 Connell losing touch with club championship is real tragedy of Normal People
5 All in the Game: Nigeria bite back in war of words with Redknapp
Real news has value SUBSCRIBE

Manchester United extend Odion Ighalo loan deal 12:00
Michael Jordan speaks out against George Floyd killing in rare statement 11:56
The Offload: Assessing rugby’s risky (temporary) laws 10:00
All in the Game: Nigeria bite back in war of words with Redknapp 09:00
Colin Kaepernick’s exile is too fresh for NFL to speak out on US protests 07:00