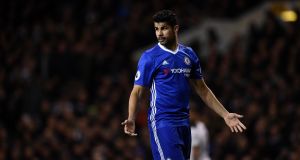 Chelsea’s Diego Costa has had his head turned by interest from China. Photograph: Dylan Martinez/Reuters

Antonio Conte has no plans to hold clear-the-air talks with Diego Costa and the onus will be on the Spain forward in training this week to prove he warrants a swift restoration to the Chelsea side for Sunday’s visit of Hull.

Costa, the subject of interest from the Chinese Super League club Tianjin Quanjian, who would apparently be prepared to pay him £30m a year, said he was suffering from a back injury last week and duly became embroiled in a row with Chelsea fitness staff. He was excluded from the squad for Saturday’s game at Leicester City.

The 28-year-old has been pursuing his own rehabilitation schedule ever since and worked outside at Cobham on Monday, as he had done the previous day, while the rest of the first team and management staff enjoyed 48 hours off following the 3-0 win at the champions.

Although there is an acceptance the striker may have been suffering some discomfort in his back, the club believe the situation had come to a head only as a result of the emergence of that interest from China and, although they will not countenance selling the division’s joint leading scorer mid-season, it appears increasingly likely he will depart Stamford Bridge in the summer. Certainly the events of the last week have ensured their original plan to secure Costa to new terms – his deal expires in 2019 – has effectively been abandoned.

Yet conviction remains within the set-up that Costa can be reintegrated into the team for the rest of this campaign, in an effort to ensure the issue does not derail the team’s pursuit of a second Premier League title in three years. Key to that, however, will be the player demonstrating an improved attitude and a willingness to fight to regain his first-team place.

Conte does not intend to instigate discussions with the player to smooth that return to the fold and will merely seek evidence of a positive reaction in training. The manager has always made clear to his players that their prospects of making the team hinge upon impressing with work-rate and commitment in training in the buildup to a fixture and Costa, who has been urged to apologise to Conte by fellow senior members of the side, must now earn his recall.

The club’s medical staff are due to assess the striker on Tuesday and, if he is passed fit after the back trouble, he will rejoin his team-mates as they begin preparations for Sunday’s game. Costa will have to convince the manager that he deserves to play ahead of Willian, Eden Hazard or Pedro Rodríguez, all outstanding in that emphatic win at the KingPower Stadium which saw Chelsea stretch their lead at the top of the Premier League to seven points.

Costa had agitated for a return to Atlético Madrid over the summer but, having been persuaded to stay, has 14 Premier League goals this season. He had originally been omitted from the squad for that fixture at Leicester after a row with a fitness coach last Tuesday after staff aired doubts over the severity of his back problem. His relationship with Conte, who had supported his medical staff’s assessment of the player, were strained further after another heated exchange the following day.

That left him working on his own at Cobham, and later than the rest of the squad, last week and over the weekend, albeit he has been complying with the rehabilitation programme stipulated by the medical staff.

He did take to social media on the eve of the Leicester game to publish a picture on Instagram alongside the message “Come on Chelsea”, with that post immediately ‘liked’ by the Chelsea captain John Terry and the midfielder Cesc Fàbregas. That pair were among the senior players encouraging Costa to knuckle down and put thoughts of a lucrative move to China on hold until the summer.

Conte made a point of stressing his leading scorer’s absence at Leicester had been born of the back complaint, but did not deny the rift which flared over the issue. He claimed publicly to have no knowledge of interest from China in the player, though Chelsea are believed to have been aware of Tianjin Quanjian’s eagerness to secure the player for as much as £80m for around a month.

Tianjin Quanjian’s ambition will not be dampened even in the wake of the Chinese Football Association reducing the number of foreign players who can appear for a club at any one time from four to three as they seek to curb “irrational” spending, and their intent is understood to have been lodged with the player’s representative, Jorge Mendes.

It remains to be seen whether the Costa issue influences Chelsea’s movements in the transfer market this month, with their own interest in Swansea City’s Fernando Llorente established. Certainly, should Costa depart as anticipated in the summer then securing a replacement will become a priority at the end of the season, with Everton’s Romelu Lukaku, Christian Benteke at Crystal Palace and the Real Madrid forward Álvaro Morata to come into their thinking.