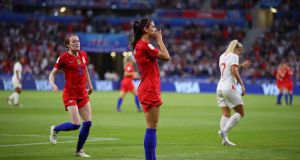 Alex Morgan of the USA celebrates her goal against England. Photograph: Getty Images

They have won new friends and influenced plenty of opinions during a transformative month in France but the Rhône was swelled by English tears last night as Phil Neville’s Lionesses proved second best to Jill Ellis’s defending champions.

They and their manager can head to Nice for Saturday’s third-place play off with heads held high though after a wonderful game featuring some particularly harsh luck, most notably the marginal offside which saw a White goal disallowed, a missed penalty by Steph Houghton and the sending off of Millie Bright after two yellow cards. Well before the end, the US had paid England the compliment of shifting to five at the back.

The teamsheet made intriguing reading. Megan Rapinoe proved a shock US absentee and, as the “is she injured or dropped for disciplinary reasons” debate swirled in the sultry evening air, the English contingent joked that America’s outspoken social activist-cum-left-winger may have no fear of standing up to Donald Trump but Lucy Bronze was something else entirely.

As expected, Bronze remained at right-back but Neville, too, refreshed his side, switching formation for the first time in France.

One change was enforced, a hamstring pull dictating that Karen Bardsley was replaced by Carly Telford in goal. Otherwise Rachel Daly was deployed in front of Bronze on the right of a new look 4-4-1-1 configuration which also saw Toni Duggan and Fran Kirby dropped, Beth Mead introduced on the left and Nikita Parris moved up front just behind Ellen White.

Not that England did too much attacking in an opening period dominated by Ellis’s side and featuring Parris persistently being forced to drop deep and track back. Neville had predicted that a set of players with a useful habit of scoring early goals would want to “throw the first punch here” and so it transpired.

As Rapinoe’s replacement, Christen Press had a point to prove and she had already shown off a devastating change of pace before supplying the US with a 10th-minute lead. It came from a cross, Kelley O’Hara providing an inch-perfect right-wing dispatch for Press to head home, the winger rising imperiously above Bronze who had been caught badly out of position at the back post.

At that point England looked in severe peril of being overwhelmed. They were snatching at the ball and conceding possession far too cheaply but then Ellis’s side momentarily seemed to lose concentration – or perhaps take a breather in the 28C night-time heat.

Sensing a rare opening, Keira Walsh quite brilliantly played Mead in courtesy of a visionary diagonal ball and her curving left-wing cross was met on the volley by Ellen White’s outstretched toe cap. The ball flew beyond Alyssa Naeher and into the bottom corner as White celebrated her sixth goal in five games. Maybe Neville was not being quite so fanciful when he described her as a cross between Ruud van Nistelrooy, Alan Shearer and Michael Owen.

The manner in which White had bisected the central defenders offered England hope and their manager became so excited he had to be ticked off for sprinting on to the pitch in jubilation.

It did not last. Telford had earlier performed wonders to deny Rose Lavelle but she had no riposte to yet another goal from a cross – who said they had gone out of fashion? – at the end of a classically rapid USA counterattack.

Ellis’s captain had hitherto been virtually, deceptively, anonymous but her movement across a bewildered Stokes was simply bewitching and fully deserved to preface her own sixth goal of the tournament.

Few could argue the US did not merit their half-time lead but, to England’s immense credit, they repeatedly rallied, refusing to fold. Indeed they could conceivably have gone in level at the interval had Naeher not made an acrobatic fingertip save to divert Walsh’s 25-yard thunderbolt as it whizzed on its apparently inexorable trajectory towards the top corner.

If that made theories Ellis’s goalkeeper was her team’s weak link look distinctly fanciful, no one could argue this semi-final was anything less than a sensational advert for the women’s game. Or that Neville was right to be privately worried about the sheer physical power of this American side.

The time had come for Neville to earn his money and he responded by reverting to 4-2-3-1 by replacing Mead with a natural No10 in Kirby and relocating Parris to her more familiar right-wing beat in front of Bronze.

Neville is big on standing by his principles and philosophy but he deserves plaudits for acknowledging he got his starting system wrong and rectifying it by reverting to a more effective framework.

Until then the US had literally been pressing England into submission, smothering any creativity out of them but, with Kirby suddenly confusing Ellis’s players by ghosting between the lines, gaps suddenly began appearing. Jill Scott too appeared newly liberated and enjoyed a generally excellent second half. Walsh – justifying her selection ahead of Jade Moore – played a superb pass into one such space, permitting Scott to flick the ball into White’s path. The striker’s left foot finish looked to angle done the rest but Ellis immediately requested a VAR check and the goal was disallowed for the tightest of offsides against White.

The look on Neville’s face spoke of searing disappointment but he took take mild encouragement from the injury which had forced the impressively influential Lavelle off. On the other hand Ellis had ordered a switch to five at the back as she instructed her side to sit back, protect their lead and see the game out.

That plan swiftly went awry when Kirby slipped a pass to Stokes who crossed for White only for the striker to be sent tumbling.

It did not look a penalty but a lengthy VAR check ensued and concluded with the Brazilian referee pointing to the spot. Houghton stepped forward but her penalty lacked power and Naeher saved.

As things unravelled Millie Bright was sent off for a second yellow card, namely a foul on Morgan.

1 America at Large: Golfers guilty of legitimising Trump’s toxic regime
2 ‘This is not a personality contest’ - Jack Nicklaus endorses Donald Trump
3 Solskjær’s stock is on the rise again after clever squad rotation
4 Ireland, France or England? Who needs what to win the 2020 Six Nations
5 Eamon Donoghue: Tyrone need Conor McKenna inside and out
Real news has value SUBSCRIBE
Crossword Get access to over 6,000 interactive crosswords