We tracked the thousands of tweets posted during Euro 2016 clash 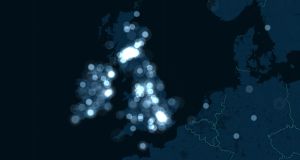 Nearly 21,000 tweets about the Republic of Ireland’s crucial Euro 2016 qualifier against Scotland on Friday night were posted over the course of the match with the level of intensity peaking when the Scots scored the winning goal with just over 15 minutes to go.

Scotland’s killer goal caused Twitter flares around the world with the biggest concentrations recorded in Dublin, Glasgow and across the east coast of the US, according to a data visualisation put together by The Irish Times in collaborastion with a team of researchers from Digital Humanities and Journalism group (HuJo) at the Insight Centre for Data Analytics in NUI Galway.

Tracking the location of the tweets was made possible through a system from the HuJo group at Insight Centre. Over 16,0000 of the 20,723 tweets were geo-tagged using this system, while CartoDB software was used for the data visualisation.

The vast majority of tweets came from Dublin and Glasgow with the biggest spike in activity recorded in the immediate aftermath of Scotland’s goal in the 74th minute.

When the goal went in, Twitter came to life across the UK - with London briefly rivalling Glasgow and Dublin in terms of engagement. The goal also caused US football fans to start tweeting about the match in larger numbers.

As the game wound down, the Twitter flares across Ireland dimmed as Martin’s less than Jolly Green army slunk away from the web in despair while Scotland started to shine with increasing brightness.

The visual representation also shows what other parts of the world were watching. Many spots on the east and west coasts of the US were tweeting about the game while Sydney and Perth were also quite active.

A surprising number of flashes can be seen in east Africa, although the presence of an Irish presidential tour party in the region at the time was most likely coincidental.