Liam Brady is candid about the lack of sentimentality in coaching and decoding accents for Bill O’Herlihy but, even after 18 years as head of youth development at Arsenal, he’s not reaching for slippers 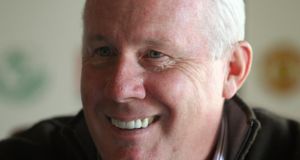 Liam Brady: ‘Exhausted? No, no. Watching football sitting in a chair is not a chore. It’s not work’ 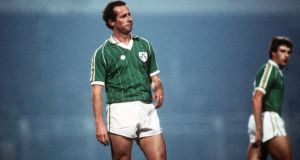 ‘You become good at something... because you love it’: Brady playing for the Republic of Ireland. Photograph: Billy Stickland/INPHO 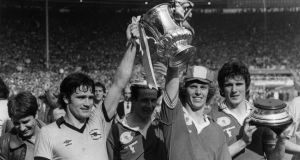 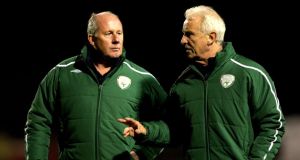 It is a wonderful thing to be driven around Highbury by Liam Brady. It is the area of London he first came to as a teenager. Now the baby seat for his granddaughter, Aoife, is in the backseat of his car.

“This is Highbury Fields, ” he says, as fine houses of yellow brick ease themselves into another blistering day of the London heatwave. Past the Emirates stadium, Arsenal FC’s new home, built on land that mostly belonged to the railway. Past the apartments that surround the stadium, past the club offices.

“You have to cross that bridge there to get into the stadium. It’s a railway bridge,” says Brady.

Round the corner then and past the Arsenal Tube station, not even five minutes from the Emirates Stadium. And then the old stadium, in all its Art Deco finery, red and white, and reborn as apartments now. Brady points out the edges of the new gardens planted where the pitch used to be.

“I lived down there,” says Liam at one point. “When I first came over.”

He was in digs in Plimsoll Road. He was 15 years old. But London was not entirely new to him.

“I’d been to England a few times because two of my brothers were professional footballers over here.”

Brady is sort of beyond cliche. He surprises you. He is both forthright and gentlemanly.

The worst tackle, he says, is when the other guy comes in just slightly late and so his studs are coming down your shin and down your knee. Good God, what do they call that, I say, ready for any drama, and the technical term.

“An over-the-top tackle,” he says, and laughs out loud.

He was kept out of the 1990 World Cup and the last bit of the 1988 European Championship by injuries which still hurt him. No histrionics here.

“Usually you become good at something, Ann Marie, because you love it. No kid is going to turn it down. I wouldn’t put any kid off it.”

Of course he was part of the recent marathon of soccer punditry on RTÉ .

“We had a great World Cup to commentate on,” he says.

The atmosphere this time was much better than during the 2010 South African World Cup, “where you had white people who didn’t like football and black people who couldn’t afford to go and see it,” he says.

He was pleased that RTÉ introduced new people to its famous panel of himself, John Giles and Eamon Dunphy. Like Richard Sadlier and Kenny Cunningham. And Ossie Ardiles.

“Ossie,” says Brady, “I had to translate Ossie to Bill [O’Herlihy]. Bill didn’t get Ossie. But I’ve known Ossie a long time.”

Brad Friedel, Neil Lennon, Ronnie Whelan – “Ronnie’s one of us,” he says.

Surely he must be exhausted after the whole competition.

“Exhausted? No, no. Watching football sitting in a chair is not a chore. It’s not work.”

When he was young the GAA had a ban against soccer. His family had a love for Gaelic games. His father had played for Parnells in north Dublin and Liam played Gaelic for his school, Saint Aidan’s CBS. But officially there was a great divide between the two.

“There was an animosity and bias against people who were interested in soccer. With that ruling it was almost a sin to think about soccer.” He laughs as he says this. And perhaps this is why football is not work to him, even now.

What about being imitated on Après Match then? Does the impersonation of him hurt?

“Not in the slightest. They’re talented guys. They can be a bit near the mark. They’re spying on us, and RTÉ give them that privilege. They’re coming up with the sensitivities between people. But ultimately myself and Eamon and John don’t take ourselves too seriously, particularly not our wrong predictions.”

At the start of the World Cup, he chose Argentina, Brazil and Spain. The other two didn’t do much better, and when he thinks about it now of course they should have had Germany.

“Our saving grace was saying that Brazil were not going to win it, after seeing them play.”

Actually the impersonation of Liam Brady isn’t the strongest in the Après Match repertoire. I didn’t even know it was meant to be him. “I think the guy who does me is not a mimic. He’s more a conductor of the farce. He doesn’t do many people. He might do a German . . .”

He’s just retired as head of youth development at Arsenal after working at it since 1996. “The same time Arsene Wenger joined.”

He’s very supportive of young players. “Money rules now, Ann Marie. You have players worth 30 or 40 million and the kids are being knocked back and they’re thinking, my time is nigh. That’s tough for a kid. When I started, the squad consisted of 16 players. Now the squad is 23 or 24 established players.”

So it is harder for untried young players to get a game.

But there is no sentimentality for the past here. There’s no bewailing the fact that soccer is over-coached and over-monied, or that young boys no longer play in the street. “Our time is now,” says Brady. “The streets will never be back. That innocence of playing football is gone.” As a child he played in Ellenfield Park in Whitehall – “A godsend, that place”.

Now that feeling has to be supplied elsewhere. “I’ve had experience of recruiting young soccer lads at nine, 10 and 11 and in many ways giving them the same streets experience.”

I am shocked that a nine-year-old child could be recruited to a soccer club. Brady agrees that they are constantly under scrutiny and competing with one another. And that, of course, many of them are weeded out a few years later.

“That decision comes when they’re 12 or 14 and it’s a real kick in the nuts for a kid. But I also know from experience, and I tell enough of them, that I say they have no career with Arsenal – but they go on to have careers elsewhere.”

We’re talking here about 14-year-olds having agents, about “parents getting excited”, as Brady puts it, about the havoc that proximity to one of our culture’s most cherished dreams – football stardom – can wreak on hitherto ordinary lives.

Football in the blood

But digging for tragedy is a crass occupation and on this Brady doesn’t play ball. His two brothers, Pat and Ray, 20 years older than him, may have been playing (for Millwall and Queen’s Park Rangers) in the 1950s and 1960s, when footballers earned “a bit more than the average guy” (another brother, Frank, played professionally at Shamrock Rovers).

However Pat went to night school while still a player and went on to become a teacher and then a lecturer in economics. Ray became a publican in Sevenoaks in Kent.

Liam Brady says now he’s sorry he didn’t go to night school himself. If he was to go to university he might study history or perhaps languages; he learned Italian during his post-Arsenal days at Juventus and Sampdoria.

“I was too busy with my football and having a good time,” he says. But really he was too good a footballer to have to worry about an alternative career.

What he also says is that “In my neck of the woods you were out looking for your first job when you were 15 anyway. I suppose now it would be 18 for working-class kids.”

Has he ever not worked, I wonder, thinking of a 58-year-old man who started earning when he was 15? Who has had a hip replacement already, due to arthritis “and wear and tear” as he puts it.

He still lives in Brighton, he says, although he has a place in London. In Dublin he stays in a hotel.

He settled in Brighton when he was manager there for two and a half years and he’d moved his children, Ella and Michael, around enough. He won’t manage a team now he says.

“That’s gone, gone, gone. I’ve no interest in that at all. I really want to enjoy myself and that’s a job that’s full on. It’s a crazy job. I’m not chasing money. What is that they say – I’ve places to go, things to do, and people to see.”