Liam Buckley: ‘He was a bit of a player then but my God, if I had known what was to come’ 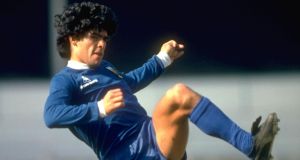 Diego Maradona pictured during an Argentina training session in May 1980: Mandatory Credit: Allsport

Most of those who saw Maradona play in the flesh feel fortunate now but Sligo Rovers boss Liam Buckley got to play against him as a part of the League of Ireland selection that took on Argentina at the Estadio Monumental in Buenos Aires 40 years ago. He had heard of the 20-year-old before the game but not much more. The Dubliner came away, though, knowing that he had witnessed something, someone, a little but special.

“It was a magnificent occasion in the River Plate Stadium,” he recalled on Thursday after news of Maradona’s death broke as he prepared for Wednesday night’s FAI Cup quarter-final win over Derry City.

“I remember having watched the 1978 World Cup final and, I swear to God, it all came flooding back to me; all the ticker tape, the place was full, it was jam packed and I could just hear the national anthem through the mire of noise. It was a crazy sort of scenario but a great and fantastic occasion.”

Aside from Buckley, Paddy Dunning, JJ Minnock and Tommy McConville were among the players to feature for the visitors. Their hosts included three of the starting line-up from the World Cup final played at the same stadium two years earlier; Ubaldo Fillol, Jorge Olguin and Americo Gallego plus, of course, an up and coming new star.

Maradona had actually come on for Ricky Villa against a League selection on the eve of the 1978 World Cup so Eamonn Gregg, who played in both games, might have remembered the teenager but the full scale of the youngster’s talent clearly still came as a bit of a surprise.

“My recollection of it,” says Buckley, “is that I was interviewed there and they said they’ve another young player – I was a young player with the League of Ireland selection – called Maradona. I didn’t know a lot about him, I had heard him being mentioned and he was supposed to be a very good player.

“Then, in the match, he was fantastic. He scored the goal and we lost 1-0. I just remember him nutmegging one of our lads in the middle of the park, then running through and scoring from the edge of the box. He was a bit of a player then but my God, if I had known what was to come.”

Buckley, who turned 60 earlier this year, recalls the entire tour, one of a succession of remarkable South American adventures arranged by Louis Kilcoyne, with huge fondness.

“Louis organised for us to play the national team, then we played in a mini-competition with two other teams [Newell’s Old Boys and Rosario Central] and then we played a provincial team [Club Cipolletti] that had not been beaten for God knows how long,” he says.

“We ended up drawing with them and they invited us back. Louis came to all the players at the end of the three week tour when some had to go home because they had jobs. The rest of us stayed, went back down to play them and won. That was probably the best trip I was ever on. We were there for about a month.

“The games were brilliant. I can’t recall the two clubs we played against but they were local rivals and for the games both ends of the stadium were full with the away supporters of the opposition who were up for us!

“The game in the River Plate Stadium [also known as the Estadio Monumental] just reminded me of the World Cup final when they played Holland [there was actually a few thousand more people, 75,000, there for the 1980 game]. I just could not believe it, it was just surreal.

“I didn’t know that much about Maradona at that stage because he was only 20, like myself, but I learned a lot afterwards. He was arguably the best player of my generation.

“He was kicked all over the place in a lot of matches but he was a wonderful player . . . He had great balance, great technique. For a small guy, he was built like a tank. He was very hard to get close to.

“When you talk about the best players of my generation you talk about what they had going for them and he had everything going for him, he could head the ball, he could handle it too as we saw in the World Cup, but his technique was fantastic. He was so quick, so strong so powerful running with the ball.

“He had everything. He was a superstar. I could mention some great players from my era but he was the best of them. By a stretch. He was brilliant. And when you see how highly regarded he was down there, he’ll be sadly missed, that’s for sure.”