St Pat’s out to make most of home advantage 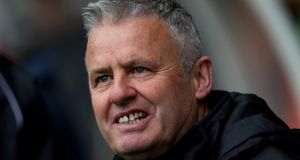 St Patrick’s Athletic manager Harry Kenny: ‘They won’t like coming to Richmond, which is a tight pitch.’ Photograph: Oisín Keniry/Inpho

If Gary Shaw’s suggestion that he has “a bit of a feel”, for Norrkoping after facing them in a preseason friendly last year caused any excitement among the St Patrick’s Athletic management team, it will have faded fairly soon after he went on to reveal that he was sent off just 10 minutes in for catching Eric Smith in the face with his arm.

There will be no revenge mission in Thursday evening’s Europa League qualifier for Smith who has since moved on to Gent. The Dublin club’s manager, Harry Kenny, is understandably wary of Jordan Larsson (son of Henrik) who has five goals in his last eight appearances for the Swedish outfit who are sixth in their league having, a little like their hosts, come into a little bit of form of late.

“He’s very, very good,” says Kenny. “He is quick, pretty dynamic, but no better than [some of the] other lads they have on the pitch.

“They are used to big, expansive pitches and astro, though. They won’t like coming to Richmond, which is a tight pitch. And we will be looking to get a result to have something to work off when we go to their place.”

Kenny has a full squad to choose from and Shaw is expected to be one of two strikers to start in a 3-5-2 formation. “Keeping clean sheets at home is important,” he says, “but we’ll have a full house and we need to take the game to them because this comes around once a year so you need to take it by the scruff of the neck.”