Shamrock Rovers confident of chances ahead of trip to Norway 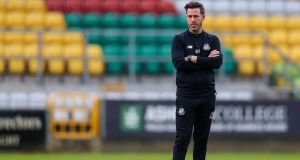 Three years in charge and now the longest serving Shamrock Rovers manager since the late Ray Treacy in the mid-1990s, Stephen Bradley believes his current team is the strongest he’s built as they look to make an impact in Europe.

“We’ve been building every year,” said Bradley ahead of tonight’s first leg at Norwegian side SK Brann.

“The first year there was obviously a lot of change. Last year was a little more settled while this year is definitely the strongest team we’ve had.”

Rovers ran Swedish side AIK very close last year, so will not be overawed by the challenge.

“It’s about how we’ve been playing all year,” added Bradley.

“We know it’s a difficult game. They are a good side, but we’re a better team than we were last year and we’re playing better football. So it gives us a chance.”

Rovers may draw further inspiration from the fact that Brann are having a frustrating season in the Eliteserien this year, sitting fifth in the table with only six wins from their 15 games to date.

Lars Arne Nilsen’s side have scored just 17 goals and conceded a goal a game, suggesting a vulnerability at the back and a lack of punch up top.

Bradley has done his homework, though, and believes those stats are misleading.

Brann are a vastly experienced team with seven former internationals, totalling close to 100 caps, having played in their most recent match, a dominant 0-0 draw at home to struggling Mjøndalen.

“They drew 0-0 on Friday but they could have won four or five comfortably.

“You can see they’re experienced when you see them play. Their know-how and game management is very, very good.

“We’ve got to understand that, respect that and be ready for it.

Bradley has midfielder Aaron McEneff back fully fit and he may feature at some stage, leaving winger Neil Farrugia (hamstring) Rovers’ only injury absentee.

1 No Masters, so Tiger Woods battles son Charlie for green jacket
2 Germany well ahead of the curve as Bundesliga gears up for return to action
3 Conor McDonald: ‘People in fitness industry need to be careful what they put online’
4 Coronavirus: Fitness industry seeing some positives in the crisis
5 America at Large: Hurling fan Dowling leading the fight against Covid-19
Real news has value SUBSCRIBE
Crossword Get access to over 6,000 interactive crosswords