St Pat’s closing in on their title goal 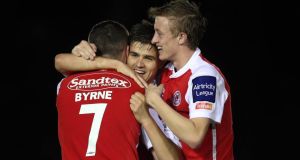 
UCD 1 St Patrick’s Athletic 3: There was an air of resignation about Stephen Kenny this week as he suggested that the league leaders “had the measure” of UCD and would double their points advantage over his Dundalk side to six here while, he must have suspected, bolstering a goal difference that was already worth an extra point against their nearest rivals. He had, as it turned out, every right to be pessimistic.

Notwithstanding the fact that they trailed for a short while, this was as comfortable a win as the champions elect have enjoyed all season with Chris Forrester the driving force through much of a game in which his goal along with the ones scored by Anto Flood and Jake Kelly scarcely reflected the scale of their superiority.

The students were game but little more really and Martin Russell’s young team seemed intent at times on making life difficult for themselves with a succession of errors that provided the visiting midfield with a steady supply of possession.

They generally weren’t short of space into which to carry the ball either with the UCD midfield then defence regularly melting away as they advanced, especially late on in the first half when they were desperately lucky to only concede twice.

Liam Buckley’s side did all that was required of them in the circumstances, peppering the goal of a nervous-looking Mark McGinley and securing the win at a canter even if they should have had a few goals more.

The league leaders started just as they would have been expected to with their midfield dominant and their defence barely troubled.


Missed chances
Had their finishing been better there might have been a goal or two pretty early on but missed chances by John Russell and Flood scarcely seemed to provide any cause for concern given the ease with which they were creating chances.

Things got a little more edgy midway through the half, however, when the home side scored completely against the run of play. It was well set up with Robbie Creevy finding Robbie Benson in a little space on the edge of the box and the 21 year-old finished rather coolly as defenders hurried to close him in from either side with a low curling shot to the bottom left corner.

Had all of his team-mates been so composed in the period that followed then who knows how the night might have gone from that point on but it was vital that the students frustrate their opponents long enough for nerves to become a factor and in truth they never got even remotely close to that point.

The visitors were back level with just over half an hour played when McGinley got both hands to a Forrester shot that was barely a foot above his head and yet somehow still managed to let it in.

Scarcely 90 seconds later Pat’s led 2-1 with the midfielder at the heart of things again in a move that was finished from the right by Flood with the goalkeeper helpless this time.


Travelling support
Any one of the three St Patrick’s goalscorers might have another in what remained of the half but the travelling support of around 1,000 had to wait until after the break for Kelly to make things safe with an angled low drive from outside the area that seemed stoppable if the goalkeeper had got down faster.

McGinley, to be fair, made amends with a fine stop from Flood not long after and over the closing half an hour there was some rather more spirited resistance from his back four which, when combined with some pretty hapless finishing, was enough to ensure that things stated respectable.

The Pats fans weren’t complaining. They’d have enjoyed seeing their team go on the rampage but sounded happy to watch them secure three points that, with just three games remaining, make the title almost – but not quite – unblowable.

1 Gordon D’Arcy: Digging deep only recipe for Twickenham success
2 Robbie Henshaw and Bundee Aki to lead from the centre
3 Out of Bounds: remember when Darren Clarke usurped Tiger Woods?
4 Diego Simeone raises the roof with sideline spectacle
5 Jurgen Klopp: ‘welcome to Anfield, it’s not over yet’
Real news has value SUBSCRIBE
Crossword Get access to over 6,000 interactive crosswords