Solskjær hoping United can rediscover their appetite for goals 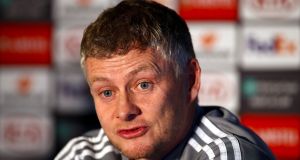 Manchester United manager Ole Gunnar Solskjaer during a press conference in Manchester ahead of the game against Partizan Belgrade. Photograph: Tim Goode/PA Wire

Ole Gunnar Solskjær is hoping Manchester United can rediscover their appetite for goals when they take on Partizan Belgrade in the Europa League at Old Trafford. Though his side opened their league campaign with an impressive 4-0 demolition of Chelsea, the six home matches since have featured just a single goal in each, and Solskjær believes United can do better.

“We’ve had a few results go against us through fine margins this season but now we know we are on the right track,” the United manager said. “The defeat at Bournemouth put an end to that mini-run we were on, but we can start another one against Partizan if things go well. We have kept three cleans sheets already in the competition, which is impressive, and now we would like to score a few more goals. If we get off to a good start in a game like this we could fill our boots, and we want to go for it.”

United beat Partizan in Belgrade a fortnight ago, and would qualify for the knockout stages with two games to spare by winning again in the return fixture.

Victor Lindelöf will miss the game with a back injury sustained against Chelsea in the Carabao Cup and exacerbated at Bournemouth, and Solskjær does not expect to see Paul Pogba in action again until the beginning of December. The midfielder still has a cast on an ankle injury, though his manager feels he should be ready to start training again soon after the next international break.

If United do qualify early Solskjær intends to continue with his policy of picking young players and reserves for the remaining games against Astana and AZ Alkmaar.

“One of the best things about this competition is the opportunity it allows you to give young players a chance to come through,” Solskjær said. “I don’t see it as a distraction from the league programme at all. We have given quite a few of our young lads the chance to play, and they have all acquitted themselves very well.”

That policy may change in the knockout stages next year, especially if United find there is too much ground to make up in the league.

United won the Europa League under José Mourinho in 2017, and with the club currently 10th in the Premier League the competition could once again be their most realistic route to Champions League participation.

“It’s one route into the Champions League,” Solskjær said. “We are not about to give up on the other one at the beginning of November. It is still too early for anyone to predict the final league table. At the moment we don’t have as many points as we would like, but things can change very quickly.”

Solskjær believes the return of Anthony Martial has made a difference to United, and hopes to have more of his more experienced players back from injury after the international break.

“Anthony is a vital player for us. He’s got different attributes to the rest of our attacking players. He holds the ball up well for us on the pitch, for example, but he’s been missed in training as well. When he’s in a good mood he really lifts the atmosphere.”

Ashley Young claims Solskjær’s enthusiasm is equally important in that regard. “He’s very positive,” United’s likely captain on Thursday said. “Sometimes in training you feel he wants to put his boots on and join in. We like that, but we don’t let him.”